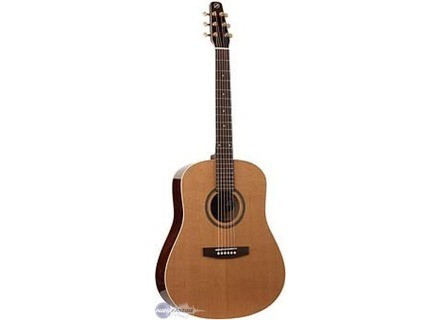 View other reviews for this product:
The 20 th anniversary S6 is made in Canada (home Godin)
The handle is sturdy, C-shaped, large but enjoyable trs. I like the ease of play his semi-gloss finish is impeccable.

There is no pan shot on MODEL, Access in acute limit is but I never go. The ergonomics are perfect. The sound is powerful and has been enhanced since I bought it 2 years ago.

I play mostly folk. This is the style that best suits this guitar. His table in solid cedar Confre him a warm sound and trs balance, from the acute to the grave. It is regrettable lack of richness in harmonics. I would say that is because of the cherrywood base multilayer, but for the price I did not get any better, even in the low-end with Martin.

The look-General for this limit is similar SERIES S6 a standard. The Difference is in the choice of wood: select the best cuts, Godin of APRS. Your exact is surprising in terms of brightness and projection of sound (I could compare a store with a standard S6 "20 th Anniversary"). Every guitar, a type of string. I tried everything on this guitar. I prfre with ropes Martin phosphor-bronze, light or medium (Avoid the SP and SP + buzy too). MODEL This no longer appears on the site Seagull (SERIES draws?), But if you see one used, Do not hesitate. Hard to beat in connection qualitprix. I got it new for less than 650. You can go up to 450 used, but require a certificate of authenticity "20 th Anniversary" with n SERIES provided by Godin.
See the source
Did you find this review helpful?yesno
Cookies help us improve performance, enhance user experience and deliver our services. By using our services, you agree to our use of cookies. Find out more.