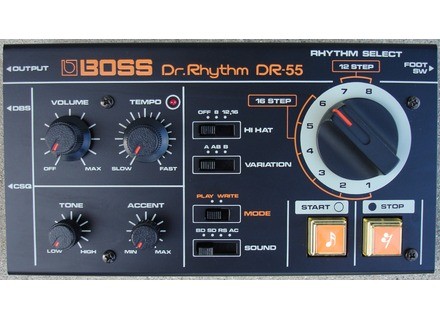 View other reviews for this product:
4 sounds (kick, snare, rhythmshot, hihat, although it is not programmable ...)
8 programmable pattern (6 times in 16 / 2 times 12) divided into 2 parts (A / B)
output "sync" with the usable material vieu Roland / Boss (in fact I connect the sync between my Korg Poly61 and also works.)
Mono output, of course ...
Pottard a "Tone" that sounds like a low pass filter
The sounds are super powerful!
It's old but beautiful trs

It's not very complicated there are 2 buttons (play / stop), and a big pottard to change the pattern.

Programming not - not without LCD screen is a little harder, but since there only 16 steps in the pattern it's OK.

It is also difficult to calibrate the tempo without "TapTempo".

The manual is pretty, it gives examples of rhythms same program.

The bass drum and rhythmshot are over-powerful.
The snare a little less, the only HiHat closed.
It is analog and is charming. Some dusts in pottards, and it sounds more like. With batteries almost empty sound is nice, too.

There are one or two things you can do with our era, but frankly sampler as its sounds, it will be more convenient.
To a collector it's a great MODEL in trs beautiful black metal, and the original look of Premire "Dr.Rhythm".
I paid a few years ago the Swiss quivallent thirty Euros, but I put the double for this fine object dcoration!
See the source
Did you find this review helpful?yesno
Cookies help us improve performance, enhance user experience and deliver our services. By using our services, you agree to our use of cookies. Find out more.