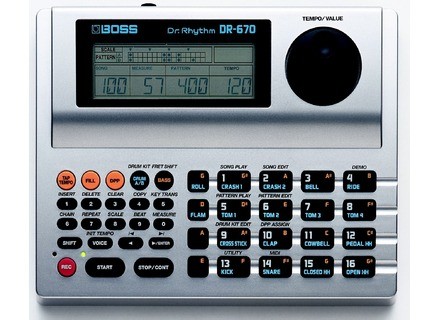 Value For Money : Correct
View other reviews for this product:
- Connections: A adj t Retailer by other users. Warning: the BAR has only output Stereo output by way of spares, which makes it inconceivable simultaneous recording of DIFFERENT lments kit on the slopes s pares - again in a serious black spot in production.
- 2 game modes: drums (lments drum) and bass.
256 drum sounds at large (52 kicks, 61 snares, rim shots 6, 32 toms, 19 hi-hats, 17 cymbals, 44 "various percussion" as congas, tablas, cowbells, claps, etc.., 20 "FX" as scratch tape rewind, etc.., 5 bass sounds to incorporate drum kits) and 16 bass tones separate drum kits (finger, fretless, pickup, acoustic, pluck ...). Each sound (even those of low) is in the mode ditable "drum edit" the BAR (modification of the ADSR envelope, the pitch, the panoramic rpartition, grade) but not utility through a MAC or PC.
- No effect section.
- 2 modes of programming: no or not real time.

- Gnrale configuration is relatively simple but it is when even though diffrent that of BAR TR-xxx, a 3 year old could not use this intuitively BAR. I confess to not be totally convinced by the ergonomics of the bte but I do not think we do better elsewhere among the outputs rcentes The models to be among the oldest brand .
- The edition of the sounds is easy if one has understood the overall operation of the machine.
- The manual is quite surprising. I'm not that sr has taught me much. I t struck by the fact that he announces a résumé of what is to come forward even to get into the explanation itself. In short, I found it pretty redundant, and even at times not enough prcis (I have some things vrifier empirically), which is a shame when you RPET.
I prcise my original manual is in English but I have a rcemment Tlcharger in French "oquot case, since the operation of the machine m ' dj silent familiar.

- Sounds are trsgnraux (or even gnralistes), so they can agree a large number of musical styles, the user to sort and rflchir cohrence the sounds they use (is it really appropriate to include a charley mtallique the TR-808 in the middle of an acoustic kit?).
- They are generally quite ralistes, and when they are not, it is often because the default custom settings are not always the most appropriate. In résumé is often sufficient to change the ADSR envelope of the initially low sduisant to find its got more. In the same order of IDE, those waiting for this ultra-BAR electronic sounds "just cooked" will be due. We must use a more kind and less BAR gnraliste for this, which does nothing to affect the quality of the sounds included here.
- The expression is good, and even too good: the sensitivity to touch is certainly adjustable (so you can always attnuer) but is curiously not disables, which means that 'it is always a minimum Submitted. The DR-670 is a victim of his modernity: it would have t be simpler to assign an option "sensitivity active / non-active" plutt DIFFERENT than including levels of sensitivity is remarkable in itself, but is done at dtriment an option to disable (and then something m'chappe).

EDIT 2011:
- I possde since 2005 but remains fairly shared his regard. The lack of spares and the relative outputs ergonomic (compared to bars in 1980) mean that if I continue to use the sounds of the DR-670 (long samples ), I am using so much more of the bote itself. The BAR and other home BOSS give me the impression of being substitutes for drummers guitarists rptition. I t more interested by a kind of fawn production station rhythmic groove box Allgemeine.
- The sound quality satisfy me fully. I regret the absence of an option of disabling the sensitivity to touch.
- The models I had tried all taient infrieurs it (the BAR and a Zoom Alesis any).
- Report qualitprix right no more.
- I'm not completely satisfied with my choice in part because of the points raised in paragraph beginners, but if I were to buy a BAR, I confess I do not know what choice I turned to . A box with the sound palette of the DR-670 (or DR-880) with the output spares and ergonomics of BAR-1980s, there has not?
See the source
Did you find this review helpful?yesno
Cookies help us improve performance, enhance user experience and deliver our services. By using our services, you agree to our use of cookies. Find out more.