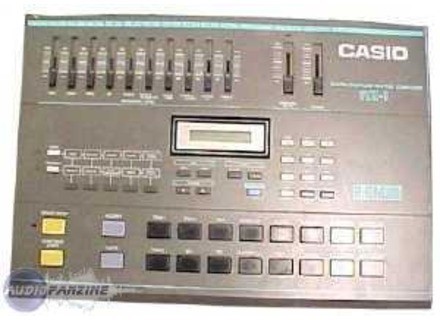 View other reviews for this product:
SP12 of the poor!
Lo-fi sampler for 4 Percussion.
intuitive sequence and groovy to death!
Some sound board, but old-fashioned sound good when trimmed and sequenced.
Separate outputs for each sound, or almost. paired certain sounds all the same.
Volume pulls for each trip and for the samples (2 to 4 samples pulls so it limits or should think before sampler on which pad is recorded regardless if its attention to the slurry)
Midi In / Out / Thru + 1 Din or something like that, footswitch (not tested), tone control (which some take to be happy bender).
10 because at that time was a machine packed with features.

It is super simple as a machine.
To sample it supports diverse sample on the pad and we are interested after adjusting the input volume.
To sequence: you press record and then start pattern. We tapped the pad and go. One can quantize before choosing Record quantize and add pleasing groove by sequencing the mute and accents in the same way that sounds.
Once the pattern adds just the combination to make a song.
Frankly there is no simpler and all is written on the machine. 10/10

The blow-bottom samples. It is unfortunate but some sounds that do not interfere too much. This is the biggest flaw and it's very unfortunate to have so little time sampling.
Cons by slamming sounds sampled and take another dimension.
The sequencer groove. I understood what it meant, finally, a sequencer groove. It must be the compression of the machine that gives that impression but it's roughly right!
Sequences, even played on a regular basis, do not sound exactly as they were playing.
I believe this machine to buy a SP12.

2 or 3 years of use.
+ + +: The groove, sampling, noon, zippers volume, ease of composition, the separate outputs.
---: Breath sampling and limited to a trickle.
I will like to test the korg ddd1.
I like BAR: A DRM1 an airbase 99, and a Machinedrum and as a sampler mv8000. I had an ESX and DX200.
For a hundred dollars I will ever be the choice. It's a super machine, user friendly, but the sampling is ultra ultra limited. (To say we must do it several times to spend a little low round completely on a pad without the sampling time is exceeded). Then the volume of samples is assigned 2-2 and that's very unfortunate. So great machine but very limited. All cheap plastic. The buttons are cheap plastic but held, surprisingly, very well shot.
See the source
Did you find this review helpful?yesno
Cookies help us improve performance, enhance user experience and deliver our services. By using our services, you agree to our use of cookies. Find out more.