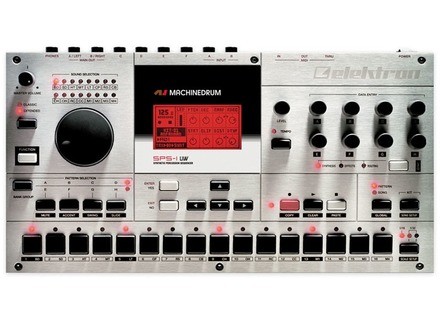 Machinedrum SPS-1UW, Drum Machine from Elektron in the Machinedrum series.

View other reviews for this product:
As mentioned in the news section, two new machines come to be added to those already existing version of SPS-1.

On every hand we can choose a machine ROM with a sample selected from the 32 memory locations available. The 2 MB of memory capacity more than sufficient for the use of samples collected or of short samples of voices or sounds different. But then higher values ​​would have been welcome anyway!

The parameters available to a ROM machine are:
- Pitch, Decay as for existing machines
- Hold: hold time of the amplitude envelope
- BRR: Bit Rate Reduction, which has the same effect for existing machines
- Start and end that define the position of start and end of reading the sample. Handy feature because with a home position after the end position, the sample is read in reverse
- RTRG RTIM and allow a re-triggering of sound (duration and rapid onset of effect for bearings)

As the SPS-1, it is regrettable that the effect module can not be used as the main outputs and not on each separate output

Ergonomics exeptionnelle the MD as well for his sound editing module for the sequencer is proven. The addition of these new features mini sampler does not change the philosophy of general editing and sequence (especially for the machine ROM)
Imagine the power sequencer and with parameter locks that can select a different setting for each step played! We can get crazy loops irrréalisables on a drum machine or groove box classic.
The only restriction, but related to the basic architecture of the machine for the tranfer of samples by noon, which is quite slow. Fortunately, once flash memory, sounds aps are deleted at shutdown of the machine.

The SPS-1 basis for creating original sounds of percussion through its various machines that provided a summary impressive range of sounds. Sample function extends further cete variety of sound.
Sound quality 12-bit is really perfect, no noise, no clip.

In conclusion I would say Bravo Elektron!
What manufacturer would offer its customers to return their machine for their add additional functionality without having to sell it and buy a new machine!
The ability to play sample adds a dimension that was sorely lacking in the basic MD. Gap filled, for me the MD SPS-1UW is the drum machine par excellence of a century even with these little problems!
See the source
Did you find this review helpful?yesno