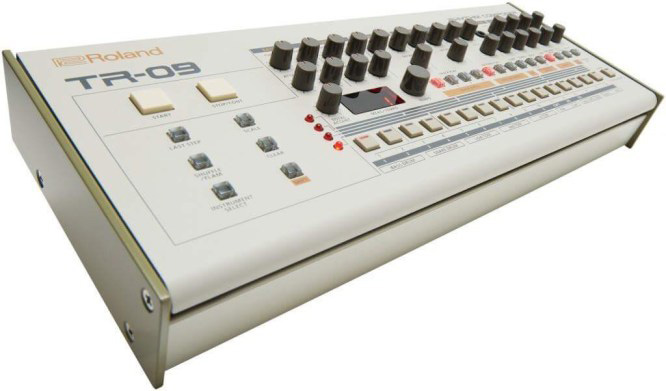 Drum Machine from Roland belonging to the Boutique series.

Publié le 12/26/17 à 08:47
Value For Money : Correct
Audience: Anyone
I’ve played house for a while now, and i’m a great fan of the TR909 sound, to the extent that almost all my tracks contain at least one Roland instrument.
Unable to buy a 909 due to its incredibly high price, I was excited when the TR09 was announced on 909 day.

First reaction :
It seems sturdy and weighs a lot (2 pounds at least). It’s well-built, and the finish is up to par. The knobs are ridiculously small!

I turn it on and press play. Ooch! Quite punchy, isn’t it?
My first impression as to the knobs only gets confirmes, my index finger gets stuck in between the level and decay controls when I try to change the decay “ala Jeff Mills” (= getting from zero to max in a wink). This forces you to turn the knob cautiously, making any “radical tweak” impossible.
The sounds are very punchy. The compressors on the kick and snare are very efficient!
I consider the toms to be sub-par compared with the rest, but nothing too bad.
The rim shot is to me the least convincing sound of the bunch, I feel it lacks presence. Inversely, the open and closed hihat and the ride sound great!!! (too bad the decay control is not available in the front and you have to go into the Edit menu).

No track mute, plus there’s something I just don’t get: no sound setting save system (something I didn’t even think about before I purchased it, as I considered totally obvious a digital machine would have such a feature – well, it doesn’t).
Regarding the settings, the menus are well conceived and sync to my Octatrack works wonder.
The USB audio out sounds very transparent and allows to get 4 stereo tracks, with each sound freely assignable to any of these.
I won’t get into the details about the tiny speaker under the machine, I haven’t even tried it.
I’m still satisfied, in spite of the few things it lacks.
I’ll be able to take it with me for live sets with no fear to lose $3k in case something happened!

Pros: - the sound!!!
- portability
- no need to resort to samples to get the 909 touch
- audio interface functionality
- comes with a very thorough manual

- no sound saves within a pattern

To conclude, i would say that it’s not a poor man’s 909, more a little sister to the original

EDIT following a software update:
In the meantime, an update has solved the previous impossibility to mute some tracks!!
You can even mute independantly the "open/closed hihat" and "crash/ride" groups, and the same update also brought instrument panning.