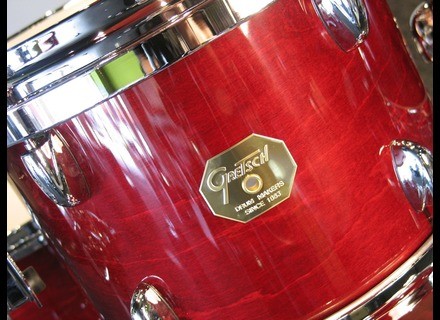 I bought it from a U.S. store and have imported in 2004, at a time when it was virtually impossible to buy in France in a timely manner, and almost half of the French prices.

This is obviously a high-end instrument that has received a nitrocellulose lacquer finish as the most beautiful guitars, and the Gretsch tradition. The drums are maple sandwich / Gumwood / Maple Gretsch is made either by Jasper until 2004, by Keller. They are very thin and very light compared to birch shells of the same thickness.

The sound is both: clear with a strong attack, controlled and singing with a rather warm resonance harmonics. The sound from the point of view of the public or recording is very much duller than from the seat of the mixer, with the fundamental emerges clearly. The bass drum in particular is doing well to have no mute and strained skin, it keeps the roundness. The floor tom or bass drum, even in small formats, generate good bass if the skins are relaxed (to shake the doors and windows more than a Yamaha RC + large diameters.
The range of agreement is very important.

The snare drum is just perfect, very expressive, with a warm sound and a wide array of sounds.

Set tight (ambassador coated top and clear below) almost classically modern jazz, you get the attack with the tension of the batter head and resonant note and heat (or the room acoustics) on dose Skin resonance. You can have fun long enough to measure the results of each agreement was: resonant head in unison striking, or a third above or below a third, or even much more relaxed than the strike .
And every time we get identifiable sounds: the Art Blakey, Elvin Jones, Philly Joe Jones sometimes, or Bill Stewart, etc..

Happiness instrument that sings all the time.

Serious set, you can play so bold Blues and even Rock, even with dimensions "Jazz", provided simple skin fold, preferably sanded, or single ply built-in mute hit GC (PowerStroke 3 is kept by example).
See the source
Did you find this review helpful?yesno
Cookies help us improve performance, enhance user experience and deliver our services. By using our services, you agree to our use of cookies. Find out more.