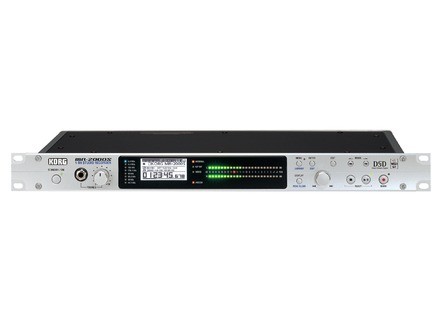 Using O.S. Version 1.5, multiple MR-2000S recorders can now be synced together to facilitate multi-track DSD recording, according to Korg.

By designating one MR-2000S as the master, the transport controls, recording mode and setting of marker points will be shared with the additional units, the company says. For example, four MR-2000S recorders would yield eight tracks of synchronized DSD recording, ideal for capturing high-quality field recordings and Foley work in 5.1 or 7.1 surround-ready multitrack, or for creating live multi-channel recordings that can be remixed later in the studio.

For increased flexibility, a new "dual-mono" mode has been added, keeping each recording channel independent for ease when importing tracks into DAW software. Previously recorded stereo files can be played back as two mono files as well, Korg indicates.

Several new features are designed to enhance the workflow process. The Setting File function is designed to allow task specific settings — input level, clock source, recording mode, etc. — to be memorized and saved as one of 400 setups. These setups save time when a single MR-2000S is being used by multiple users for different projects, or when switching between sessions. Audio can now be monitored while fast-forwarding or rewinding to assist in locating the start of a song or when setting marker points.

In addition to multi-unit sync, dual-mono mode and enhanced workflow, the new MR-2000S Version 1.5 features include AIFF file playback and support for professional S/PDIF protocol. Additionally, a new version of AudioGate software has been released (1.5.2) to support the new features. AudioGate allows users to manage, edit and convert DSD recordings into other formats.