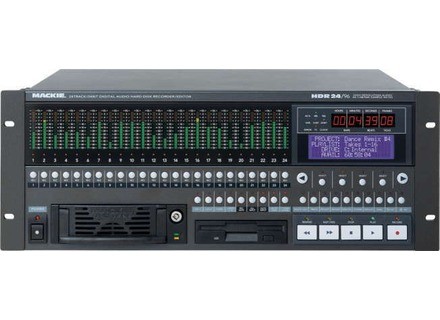 View other reviews for this product:
Unit was purchased through Sweetwater, the IO cards were purchased through American Musical (sweetwater was out of stock).
Originally my studio was looking to get one of the new ADAT HD systems. After some further research and some solid convincing by the sales rep at sweetwater, I made the purchase. Total purchase price including the AIO cards was around $5000

This has got to be by far the best hardware based recording system out there. The graphical editing capabilities do things that even ProTools doesn't do! At the time of purchase there was a drive limitation of 32gigs (internal and external individual drive capacity) Since then there has been a BIOS update (purchase) that enables the unit to take up to a 180 Gig drive or so. The interface is plain and simple. The learning curve on it was near nothing. After fooling around with if for about 2 hours I could whip through the options and settings with no trouble. The clarity of the IO cards seriously rivals the ProTools hardware interfaces. The unit has a very clean natural sound to it (not tinny or "digital" sounding at all) and thats at any resoultion all the way down to 16bit 44.1K. A 10/100 ethernet card is included to transfer files to any computer in the studio for mixdown, or editing (ie pitch correction) You can also easily fly files from any other application or recording system (that uses wav or aiff format)using the network card. There is also a SMPTE generator and reader card built in which has worked wonderfully while doing video sync.

The fan is a tad noisy... Some additional onboard wav manipulation features would be nice (like reverse or phase reverse) but since its software based... the possibility is always there for a future release.

The unit is built like a tank. There chassis is metal all around and held together with about 2 dozen or so screws.

Any studio (pro or home) should seriously take a look at this unit before investing in top end converters and other HD systems. The compatibility and ease of use will astonish. Even hardend veterans of the recording studio will appreciate it's tapemachine like interface and behavior. Price is a little steep, but the quality is certainly there!