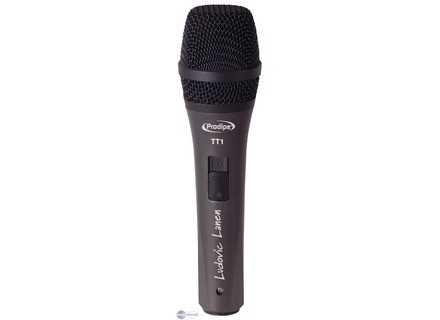 View other reviews for this product:
Type of microphone: vocals (although I'm using it more for sound decision-amp).
Technology: already detailed in other reviews.

I bought a few months ago on the advice of a friend who boasted of his merits. Since then, I used several in homestudio (sound of guitar amps and bass (yes, !!)).
I even neglect my SM58 and my STC-3D to make one or two takes with vocals.
It is also in rehearsal for decision amp sounds.
on the other hand, even if the sound is that of an SM58, I will not use it in concert for the song (not depreciated and I tend to move a lot ... or he must remain quietly on foot) . I prefer to use an amp.
It is in this use, largely a SM57.
I previously worked with the SM58, SM-57 (stage and homestudio) and recently a STC-3D (homestudio).
Where TT1 surprised me was when I faced with a bass amp. The sound is very decent for a microphone at this price point. Before the guitar amp, it also makes the job. I rarely use it only for singing. As usual the SM58 perhaps.
The quality / price is monstrous.
I remake that choice without hesitation.
See the source
Did you find this review helpful?yesno
Cookies help us improve performance, enhance user experience and deliver our services. By using our services, you agree to our use of cookies. Find out more.