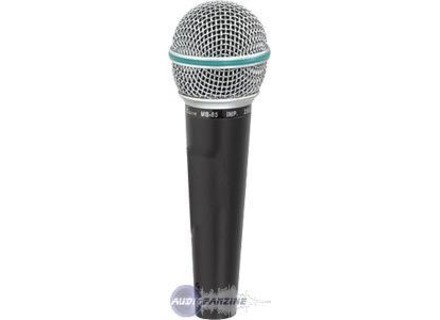 MB85, Dynamic Microphone from The T.bone.

View other reviews for this product:
Dynamic low cost, look identical to the SM58, switch on / off

I have for a while but I could not test it vraiemnt as recently as repeat conditions.
What I like above all is the price, 29 euros is given. It is apparently strong enough and the sound that comes out is quite beautiful, flattering and effective.
I tried the sm58, and bein heard on 'ets miles away from that, but if I could compare it to a Shure PG58. And then I will speak of disappointment aps aprceque I was not expecting much, but this mic is really a wheelbarrow. In sutido home, okay, it sounds not too bad, but it really hangs feedback very quickly, especially on the high mids, and it spits out very little. its output level is well below the PG58, so you have posuser on the sound system, so short ... not great feedback. Level against it by its sounds better than the PG58, for severe and moderately severe voice. But really it is painful to use. I will not go that choice, but I really wanted to test. We toujorus need a little momentum at home and now I have. I took it while waiting to buy an sm58 or beta 58a (shure too) that are microphones that I know that I like, who have so little fault they are ideal in use stage. Here, I'll test the MB85 sru scene soon, but I doubt it's really a small sound system used with low-end push very hard. So I take another micro in case, but I want to know what it is worth aprcequ'ax views of its price, it sounds really good and deserves intérsse, it's not really a agdget. But I will put this note aprcequ'il is really painful to use and I think it is useless even in certaiens conditions.

So since I changed j'edit lcoal and therefore conditions of rehearsals and I could compare it to Others Classified microphones of the same type (low cost, etc.).

With a proper mix table, ultimately it sounds if you can push and we have too many aps alrsen risk. It hangs easily under the table and the PA system, but when it amrche well, he sounds downright aps actually wrong. So I could compare it with the same type Berhinger several models. And it is much better. By repeating it keeps me drooling in the lcoal els behringer support who are already so many liters of saliva, and it sounds better grip and less.

I leave an average score aprceque good, huh, is not messing around, but it saves me carrying around a microphone and expensive and if I repeat the gun, I'm barely draw a tear. In short, a great investment for rehearsals to avoid damaging the pretty sm58 offered at Christmas.
See the source
Did you find this review helpful?yesno
Cookies help us improve performance, enhance user experience and deliver our services. By using our services, you agree to our use of cookies. Find out more.