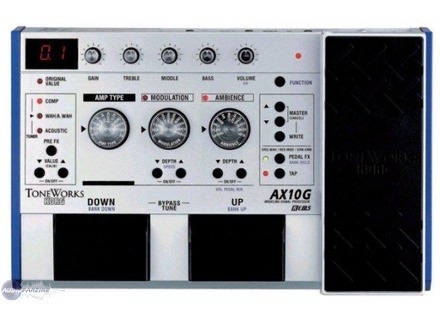 View other reviews for this product:
I purchased this unit from Nevada Music's online store for a mere £75. Considering everyone else was selling it for over £100, this was damn cheap! I bought it for home use, although it'd brilliant for live use too (used it onstage at the school talent show, didn't let me down!)

I love pretty much everything about this baby, it's got killer amp models, but if you play a lot of metal like me, you won't be at home with a lot of them, although they are good for rock and stuff. The modulation effects are spot on, including phaser, flanger, chorus, tremolo, pitch shifting and more, everything can be controlled with the onboard expression pedal. The ambient effects are also really good and everything about each of the effects can be modified

There's a few things wrong with this unit. First off, the 3 band EQ is a bit crappy, it takes ages to figure out how to work it, and when you get the right tone, it ends up messing up when you switch the tone selector on you guitar (I play an Epi Les Pail Studio, i get the treble settings spot on, but when I switch to rhythm it goes horribly wrong). The wah kinda sucks too, its got no cut off point so you don't get full control over it. Also like I mentioned above, not all of the amp models are suited for metal, only about 2 of the 11 are. You also have to create presets to switch between effects, unlike on the AX1500G where you can turn off the effects individually, which I thought was a shame.

Construction is very sturdy, but you don't wanna drop it or it'll break. It's not a Boss pedal for cryin' out loud! The expression pedal can break easily if you apply to much weight onto it.

Overall, its a neat pedal, well worth the £75, and apart from a few factors, is definitely worth adding to your setup (as long as your a rocker not a metaller) In fact, if you play metal, you could hook up your distortion stomp box (I use a Boss MT-2), set the amp model onto EQ and use the effects and your own distortion at the same time. It's great!