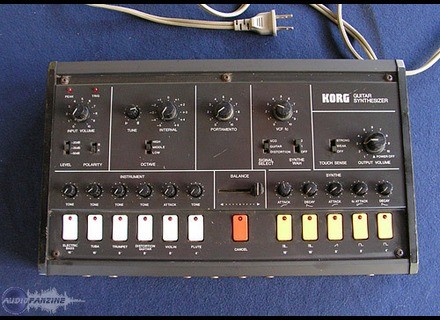 View other reviews for this product:
Guitar monophonic analog synth, dating, if I am not mistaken, in the late 70's.

Easy to wire: just plug the guitar into it. But you need a "bypass" Y to recover the sound of the guitar (at least if I remember correctly).

The problem is that you play slowly enough that the synth sounds overlap less correctly, and again, sometimes there are "slippages"!

Is that we are far from the MIDI control systems appeared later: here it is transformed into a real time audio signal "trigger" capable of triggering the oscillator synth, and it did not work to perfection.

Roland, with his "guitar synth" (I do not remember the name), used notably by Robert Fripp on the album "Disciple" from King Crimson, had done much better, because a specific guitar was sold with the synth, then the X 911 can in principle be used with any guitar (but it works less well!).

The sound is a sound "basic" Korg: a little sad and simple listening alone. But with a little reverb or chorus, and mixed with the sound of the guitar (in saturated, for example), it was still her little effect!

This device is now more a curiosity than anything else.

Note that it was sold with a metal foot ultra rigid and sturdy (I still use for other applications) rather aesthetic, one that is already a fortune (I'm not a drummer, but when I see the price a good cymbal stand, I jump to the ceiling!), as well as an assortment of pedals control (filter, LFO) indestructible well scrap that I use as always, with other analog).
See the source
Did you find this review helpful?yesno
Cookies help us improve performance, enhance user experience and deliver our services. By using our services, you agree to our use of cookies. Find out more.