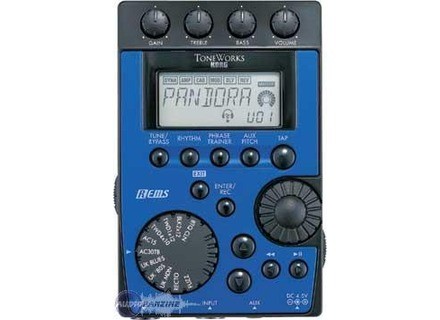 View other reviews for this product:
I picked up this bad oscar after reading a review in Guitar World. I'd checked out previous incarnations of the Pandora, and while I liked the concept, the execution left me pretty unimpressed. Then came the PX-4. Whoa. Picked it up at the local Guitar Center for $199 ($250 suggested list).

This is the sickest little box yet. A virtual "Swiss Army Knife" for anyone serious about improving their guitar-playing. How is it gonna improve your playing? By allowing you to spank the electric plank ANYWHERE not prohibited by law. The PX-4, your ax, a guitar cable, headphones, 4 'AAA' batteries and you're done. Add a CD-player, or better yet, a MiniDisc player/recorder and you've achieved a state of guitar practice bliss. You'll be so far gone, someone could drop an A-bomb on your house, and you'd still be going for those 32nd-note triplets.
The ToneWorks people have lived up to their name with the PX-4 because the most outstanding feature of this unit (other than it's ridiculous size) is how good it sounds. It is jam-packed with TONE. Gobs and gobs and gobs of rich, authentic, inspiring, soul-satisfying TONE. And that's exactly what you want. If it doesn't sound good, it doesn't matter how inexpensive, convenient, or feature-laden it is; it's gonna start collecting dust, pronto. The raunch tones are nothing short of amazing. Thick and harmonically-complex, they will produce pretty much whatever you're going for with very little in the way of tweaking. One of the things I require where distortion is concerned, is the ability to produce satisfactory pinch-harmonics and the PX-4 serves them up effortlessly. The clean tones are just as amazing. There are a few clean factory patches that had my Les Pauls 'sparkling and shimmering' - not always an easy feat for heavy, humbucked guitars, but again, the PX-4 delivered in spades. Now that the meat and potatoes have been served, how about some serious gravy? Try chowing-down on all of this: 16 amp simulators; 11 cabinet sims; 16 effect types, including, dynamic/compression controls, octaving, various wahs, ring modulators, acoustic simulators, synth effects, and pickup modeling; 31 modulation effects (more if you include variations); 5 delay types with 5 variations each; 10 reverb types; and Noise Reduction.

And it doesn't stop there. The features that make the PX-4 and invaluable practice tool are the Phrase Trainer (record up to 32 second loops from your guitar or auxilliary input and slow them down to half-speed without pitch alteration. Also transpose keys in realtime from an auxilliary source), built-in 'drum' machine (39 beats from basic 8 Beats to Sambas with or without bass lines transposable to any key), metronome and tuner. If you want to drop a few extra scoots for a pair of wireless headphones, the PX-4 even has a built-in infrared transmitter to deliver the goods through thin air.

What don't I like about this unit? Nothing. Is it perfect? Nope. But for what it is and how much it cost, it's pretty darned close. If you consider what it was designed to do, how great it sounds, and how little it costs, this thing is nearly flawless. There may be some complaints from some tweezerheads that there's not enough 'control' over some of the effects, and that might be true for the dyed-in-the-wool knob twiddlers. For example, with the time-based effects like reverb and delay, there's no tweaking parameters like early reflections or pre-delay, or any number of other components of the effect that you would find on a more expensive, dedicated effects processor. Also, and this is true with just about every digital "phrase trainer" I've ever goofed with, when you slow loops down, the sound gets pretty choppy. Depending on the source material and how much you're slowing it down, the lines you're trying to pick out can become almost unintelligible. But none of these things are really a complaint for me. I didn't buy the PX-4 to achieve the ultimate guitar tone, or to replace the rackful of signal processing and digital recording equipment I already own. I bought it so I could practice anywhere, and to this end, the PX-4 is superior to anything I've tried yet. Can you play live with it? It's certainly technically possible, although I haven't tried it (and, in all likelihood, probably won't). Can you record with it with good results? Ask Steve Vai. Evidently he's recorded entire tunes with his.

In all fairness, when you consider what the PX-4 is and what it was meant to do, there really isn't anything not to like.

The PX-4 is all plastic, but appears to be very well constructed. As with anything like this, I'd be real careful about not dropping it on a hard surface. There are just enough knobs and buttons on this unit to get the job done. Especially useful is the row of "familiar" knobs across the top: Gain, Bass, Treble, and Volume (there's a midrange control too, but you have to push another button and scroll to it), as is the wheel on the front that allows you to instantly change amp simulations. The other knobs/buttons allow for patch changes, master volume control and other functions. All functions not accessible from the front are achieved 'virtually' through scrolling, but control over these is simple and intuitive for anyone even vaguely familiar with digital effects processors. The good-sized LCD display is easy to read and provides a very effective, useful back-lit mode. The owner's manual is comprehensive and very understandable. I've only had this unit a short while, so I can't attest to how well it will hold up over the long haul, but since Korg has been at it for a few years now, I'm assuming it will do just fine.

I recently took this baby on vacation with me. There I was: Palm Desert, CA. Warm, moonlit night. Lounging poolside playing my little heart out. A few curiosity-seekers stopped to check out this little box I was plugged into. I handed the headphones over to them and chunked out a few riffs. It was a pleasure seeing the look of stunned disbelief creep across their faces. They asked for my frigging autograph.

Bottom Line: If you can afford two bills for what is arguably the best portable practice rig yet, and you don't go out and get one . . . you're an idiot.