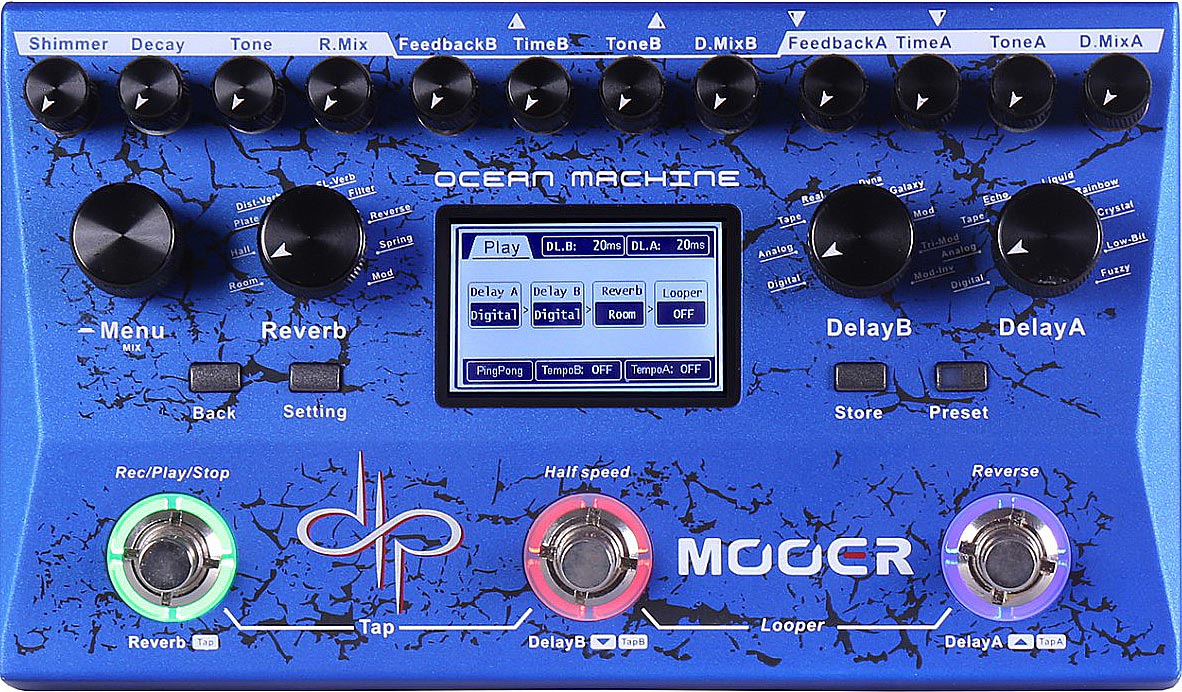 Multi-Effects for Electric Guitar from Mooer

« Incredible Sound Scapes is only the beginning »

Published on 03/29/19 at 12:45
Value For Money : Excellent
Audience: Anyone
SOUND:
Although you can use this reverb + dual delay in a very subtle way (a bit of reverb or delay) you will be addicted to hours of play and experimentation as you turn up the mix and mess around with the knobs.

You get eight types of reverbs and 15 types of delays, and you can stack these in any order for some impressive textures. The reverb and each delay has its own Tone knob, so that you can make things a bit darker or brighter, to better contrast or merge with your guitar’s tone. The reverb has a Shimmer knob, which can be applied to any of the reverb types. I really appreciate that feature since many reverb pedals have a ‘shimmer’ type reverb, but you don’t get that feature with other reverb settings. The quality of the sound is 24-bit, which means crystal clarity so that every detail of every nuance seeps through, and I found this true of both clean and distorted guitar tones. And there are some excellent (and very different) sounding reverbs and delays. For example, the Filter and Flange reverbs add some real dimension to a tone, and there’s also a Distorted reverb if you’re looking for some grit. Delay A also has a Fuzzy (or distorted) echo, and both Crystal and Rainbow settings sound incredible. Delay B has modulating echoes, but also a Galaxy echo that is totally unique and spacey. And for those purists there are Spring, Hall, Plate and Room reverbs, besides Digital, Tape, Analog and Dynamic delays. And one of the best features is the Freeze capability – when in Play mode, step on the reverb, or either delay switch, and the effect sustains so that you can play over top. This is like having a synthesizer sing out some incredible swelling tones and dynamics, even with some basic settings. Using an expression pedal further adds to the ambiance as you can assign any aspect accordingly, such as a delay’s time or the reverb’s shimmer, etc. One thing I should add, which I did not demo in the video, is that you can run the delays in parallel. In the demo I had one delay feed into another (and you can have either delay first in the chain). Conversely, you can run them parallel so that neither will affect the other, thereby producing a very different result.

OVERALL IMPRESSION:
One of the best ambient devices around, the Ocean Machine is highly addictive. I say that with some hesitation since you can use the Ocean Machine like any standard reverb and/or delay, adding just a hint in the mix. However, its real strength lies in its diversity and quality of tonal stacking. There are eight Reverb types, and besides the usual ‘Decay’ knob, you also can adjust the Tone while adding Shimmer (often reverb pedals have a ‘shimmer’ function associated with only one of its patches). There are two different Delays, each with nine types of delay (a few they both share, but unique delays for each). Both delays also have a tone control, and you can save patches, have different divisions (e.g., ¼ notes, ½ notes, etc.) or tap tempos for each, and there’s an expression pedal out so that you can really make things freaky. One of my favorite features is the FREEZE option, which sustains the reverb or delay until releasing the footswitch (and you can play over top the drone). If that’s not enough, the Ocean Machine is MIDI programmable, you can add a ping-pong effect to one or both delays, add a trail to the reverb and ‘merge’ the trails when switching effect types, alter the order of the reverb and delays (e.g., reverb + delay A + delay B… or delay B + reverb + delay A, etc.) and assign an expression pedal to any of the elements (of a reverb or a delay). And then there’s a Looper that gives 44-seconds of recording time (dub as much as you want) and then you can reverse it, play it at half-speed or both. With a stereo-in and stereo-out and adjustable Global EQ settings, the Ocean Machine is a solid buy at $345 Canadian (approx. $299 USD). Overall, there are so many features that purchasing a reverb and two delay pedals would not give you as many options and easily would exceed the price of this one unit. Mooer has set a standard with the Ocean Machine.

GENERAL USE:
There are two independent Delays and a Reverb in the Ocean Machine. You can select Patch mode or Play mode (settings can be altered in either mode, although Play mode allows for Tap Tempo of the delays (and these can be set independently with different times), as well as the Freeze mode described below. When the unit first powers up you’re at a position you last left the Ocean Machine (it remembers where you left off). There are 24 pre-made patches that you can scroll through (up or down via the Delay switches), and if you make changes in Play or Patch mode you can save it to one of the patch numbers. The demo video included with this review addresses many of the features. The Menu knob allows access to the various aspects, and in there you can alter the millisecond timing of the Delays, if you want to add a Tempo (e.g., quarter-notes, quarter-notes doubled or tripled, etc.), whether you want to add a ping-pong effect to either, what order you want the two Delays and Reverb, etc. If in Play mode you can turn the Reverb and Delays on and off (allowing you to stack the effects while playing); otherwise (in Patch mode), the two Delay footswitches control the scrolling of the patches up or down. When in Play mode, stepping on the Reverb and Delay B footswitches simultaneously enters you into Tap Tempo mode. Also, with either Patch or Play mode stepping on both Delay footswitches enters into the LOOP function. When recording a loop you have 44-seconds of record time and you can add countless dubs. This looper functions easily – one click to begin or end recording, another click to add a dub, two clicks to stop playback, and a hold of the footswitch to cancel (erase) any recording made. During playback there is a Reverse switch (to play the recording backwards) and a Half Speed switch (to slow the recording way down for some cool and slow reel-to-reel effects. Of course, you can jam your guitar to the recordings and while making changes in the Reverb or dual Delays. One of the coolest features is the FREEZE option (when in Play mode). You can hold down the Reverb or either Delay footswitch and that effect (e.g., plate reverb, tape echo, etc.) will continue to sustain until releasing the footswitch. You then can play over top the drone, which actually can be quite interesting and lively in detail (particularly when you add Shimmer to the reverb or use an interesting delay like Galaxy). And besides having Global EQ settings you can control both input and output levels for easy integration with other gear.

OTHER DETAILS:
About the size of three regular sized pedals (since it houses a reverb and two independent delays), the Ocean Machine is of normal size for what it offers (including an LED screen). The dark blue metallic powder coated paint, on a steel chassis, is of good quality and structure. The three footswitches are far removed from the knobs and any other buttons are positioned low onto the chassis. The aluminum knobs are solid. The Menu, Reverb and Delay knobs ‘click’ in place and with each selection. The smaller sub-knobs (e.g., Reverb’s shimmer, decay, tone and mix) and their associated pots turn with good quality. The LED is clear to see and not overly-bright (blue lettering on a white screen). Each footswitch has an LED around the base (green for reverb, blue for delay A and red for delay B), which indicates whether the effect is on or off (excellent for dark stages as they are very noticeable and not too bright). Both delays also blink based on their tempos, e.g., 60 bpm = blinking at 60 bpm. All connections are made in the back of the unit, which saves on some pedal space, besides keeping any cables and the power input out of harms’ way. The unit does not work on batteries and does require 9VDC 500mA power supply.