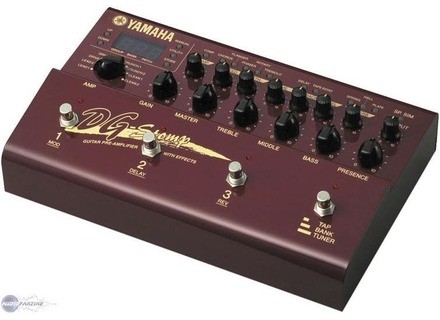 View other reviews for this product:
Typical product ... Just a reminder:

MIDI for remote control and download the "bulk" of containing sysex programs. No editing software, and against it is very bad for the Yamaha.

Tuner that is so useless that I wonder whether to grant him "deserves to exist" ...

The ergonomics are completely honest with the principle of returning the original value of the preset knobs. I would have preferred coders associated with LEDs, as the Behringer (see V-Amp and all its variations), but ... This display three segments, so it's very blah.

Manuel laughable errors in his stuffed French side: to save is the STORE need support, not DOWN ... Grrr ...

A rotator was convenient to select the different simulations of HP.
Other than that, not rocket science, turn buttons, and playing. Much better than some I knew Boss effects.

on the other hand, only three sounds in each bank is limited ...

The amp simulation is very good. Yamaha, unlike its competitors in the field of modeling, does not make the mistake of associating its simulations of legendary amps. It prevents their return-customers like "your Plexi not sound like the real" (let's be honest, who has heard a Plexi closely enough to take that kind of talk?).

Overall, it works very well, with clear transparent sound, the warm crunch that grow to look for the words "Valve Inside" on the box, and very versatile distos between the rhythmic sounds very thick to Megadeth and many more things sharp (thank you control of Presence). Again, the simulator HP does the job, without genius, but effectively.

I use it with several guitars, and for me the best proof of quality is that the preamp respects the sound of the instrument, including a high sensitivity microphones used.

In terms of effects, most of them are very convincing (reverbs, delay, chorus, flanger, phaser), but others give in the bidding: the tape-echo is not worth a real one, the tremolo is abominable, and compressor is frankly stiff. Note, that makes it ideal for tapping into the clear ...

Final note: some presets are really bluffing (imitation of Santana is very well made), but the vast majority of factory sounds are drowned under the effects.

I recently bought the DG-Stomp used, after ordering a rack Behringer V-Amp Pro that is slow to arrive.

I love the portable format, the strength and versatility of this pedal, so I think the Yamaha is an excellent complement to the Behringer, which will be less prone to transport.

At a tad more than € 250 for a machine in its original box with instructions and 3 months warranty, I think I made a deal. I think I would do this choice.
See the source
Did you find this review helpful?yesno
Cookies help us improve performance, enhance user experience and deliver our services. By using our services, you agree to our use of cookies. Find out more.