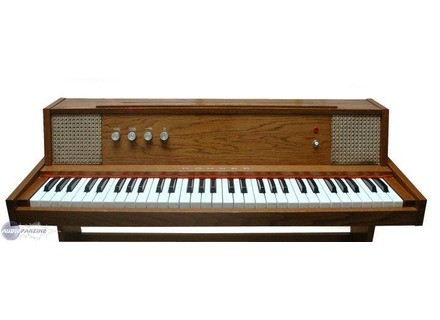 View other reviews for this product:
The Hohner Pianet M is a popular electric piano and it was one of the best one’s that Hohner Made. Hohner is a company from Germany and it was produced between the 60’s and 70’s. The sound of the Pianet M is from a bunch of metal stings that are plucked by pads that are the inside of the unit and then medal rods connected to the keys so that when you press a note the pad moves and makes the string vibrate which creates that sound. There are other versions of the Hohner Pianet as well, the first version of the it by Hohner was just called the Pianet. Then came out when the Pianet C the Pianet L and this version here (not in that order though). The Hohner Pianet M was one of the final models that came out and that’s when they changed the pads on the inside from foam to rubber so they would last longer and be better.

This is one of the reason that the Pianet M models was so popular because it basically would last longer, they have worked out all of the kinks with this model of the Pianet by Hohner. The M model was made for home use only and was built in a case that was made of wood and had speakers also built in on it, so no need for external speakers. Also, the M model didn’t come with legs, the previous models had legs so they could stand at a good height on there own. A lot of the technology used on the Pianet M is still being used on a lot of electric pianos in todays world almost 40 years later. Hohner was way ahead of time when making this model. I take my hat of to Hohner they have created a great electric piano and if I could rewind time I would purchase one of these now.