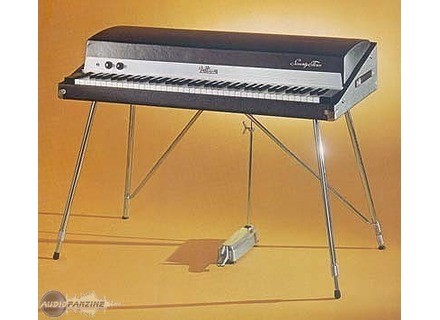 View other reviews for this product:
The Fender Rhodes Mark 1 was originally produces in the early 70’s. People went crazy over the Fender Mark 1 back then it was like every single major musician had one and every one wanted one maybe because of just that reason. Of course the 70’s where a different time in music and the average Joe couldn’t afford to purchase these back then . The Fender Rhodes Mark 1 was a great stage piano and is to be used with a guitar amp. The front knobs are only for volume and some bass eq controls. You really didn’t have many options over controlling your sound on these back in those times (its amazing how far equipment has come over the last 40 years). The Fender Rhodes Mark 1 is kind of like a “suit case” model as the call it. Because it had the old suit case look too it and the suit case handles on the side of it for carrying it. Plus the weight of it was great, you could almost lug it around anywhere with you. It was created to be moved around a lot.

After the first few years of this model they have went back and made a lot of changes to it The original mark 1 had the hammer tips that couldn’t be replaced. But when they came out with the newer versions of the Mark 1 they made it so you could replace the hammer tips because over time the hammer tips too some wear and it really affected the piano. That was the biggest change in my book and im happy they have done that. Or at least I was at the time, I still think they my grandad might still have one of these in his shed. Its definitely not in playing condition if it is still in there. But there is no doubt that the Fender Rhodes Mark 1 is a classic model.