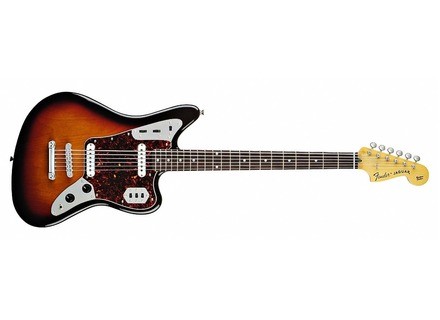 View other reviews for this product:
It is a japanese, a kind of reissue of the famous Fender bass VI. It is shorter than the original (28.5 against 30 inches) This poses a problem also for strings, but I will.
If not done well
Rglages a bit complicated to beginners, but quickly found its young. In fact you should never use the top slecteur to me (its too hot)
The pickups do not sound too Japanese mals, but suffer a bit high volume (I mean by trs trs fort), I am trying over the Seymour Duncan at the moment

Difficult instrument to play because resembles neither a low nor a guitar. We need to review his fingers and his approach to the race. No games dcemment agreement possible by using the A string and low E because they are too big. For those against the ropes, with a good distortion, a killing!
The strings are close to a game which requires the tab.
I put 6 for use in the first. APRS one tames the bte and we immediately find new positions of agreement and the Ides of components are scrambling ...

The Premire four strings are trs deep void. To get an ide, it must cost the track "The Crawl" by Placebo. The strings of the MI and serious sound more finely than a normal low and also have less sustain. So this tool does not replace a bassist or a guitarist for that matter. For those against the ropes with a big muff, a gives you a good slap.
I play this thing on a bass amp and a 6x10 SVT3 Pro HLF. That's perfect. I also tried a Twin and a Bassman 59. It rolls too.

I've had six months, and every day she m'tonne. The instrument is definitely not versatile, but that's what makes it so charming.

Attention to the strings, can not be used for now that the strings for fender jaguar baritone custom. The strings of the Fender Bass VI and the D'Addario XL155 SERIES are too long. I ordered 5 sets of reserves at: http://www.guitarpartsresource.com/

Trs is difficult to obtain in Belgium, I believe that France is the same problem. After a while I took my car to try one in a store in Saarbrucken. They always have 1 or 2 in stock at a price of 695 Euros
See the source
Did you find this review helpful?yesno
Cookies help us improve performance, enhance user experience and deliver our services. By using our services, you agree to our use of cookies. Find out more.