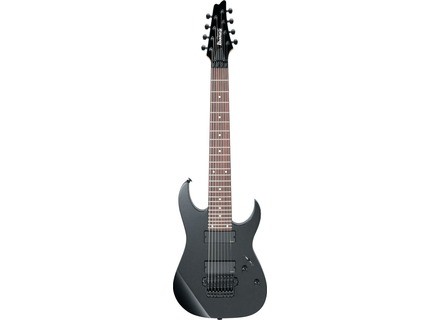 View other reviews for this product:
As a long time seven string player, I just had to get myself one of these RG2228s to see what all the fuss was about. There are actually two versions of these. Sometime around 2008 or so, they decided to upgrade them with titanium rods in the neck to help improve overall stability, and I think the headstock might be slightly different, but they're fairly similar. The guitar features a basswood body, a maple neck with a rosewood fretboard, 24 extra jumbo frets, dot inlays, a special locking hard tail bridge, two humbuckers, one volume, one tone and a three way switch.

First thing I should mention is that the neck on this is pretty damn huge. If you have small hands, you'll probably hate this. Hell, I have big hands, and it took me awhile to get used to it. I had some issues with hand cramps at first, so I had to adjust my technique when playing this. The guitar itself is put together nicely, and the fretwork is solid. It's a good bit heavier than a normal RG, so keep that in mind as well. The bridge on this is actually a hard tail bridge, despite it looking like a floyd. I kinda wish it was a real floyd, but that's because I'm a bit of a tremolo whore. The neck on this is a 27'' scale neck, and while it's noticeable, it's not a huge adjustment in playing when compared to other neck scales. I can go from 24.75'' to 27'' without much of an issue.

The guitar comes equipped with EMG 808s stock. These are the industry standard 8 string pickups, and they do a pretty good job. I prefer them to the Blackout 8s which tend to be a bit too bass heavy. The cleans on these are somewhat sterile sounding, but that's to be expected of most active pickups. The mid gain tones are decent, but they really excel in the high gain department. The pickups can get a bit muddy with the low F# (or whatever you happen to tune it to), but it's not too bad. If you need more clarity, try swapping in some EMG 808X pickups. They help cut down on the mud and give it some more dynamics than the standard EMG 808s.

Before Carvin came out with their 8 string model, this was about the best 8 string you could get for the money. I greatly preferred them over the Agiles with their crappy fretwork and QC issues. However, now that Carvin has released their models, it's kinda hard to recommend these. One thing that might help those that play more conventional guitars: try tuning the F# down to E. To me, that made much more sense than keeping the F# as I was able to move around the entire fretboard in a more natural manner. Trying to relate F# and E was a pain for me.
Did you find this review helpful?yesno