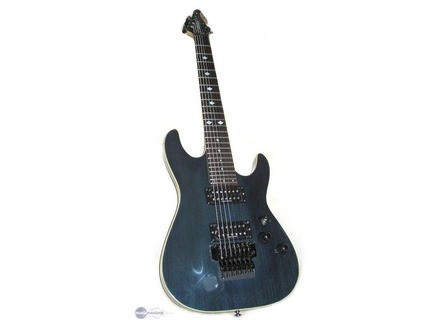 C-7, Electric solidbody baritone or 7/8 string guitar from Schecter in the C series.

I bought this guitar three months ago in a store called 'L'Isola di Wight' in Pescara (Italy). I gave back a Jackson Japan guitar, and I paid 200 $.

I really like the instrument woods and the Alnico Duncan Designed humbuckers. They give a tight bottom end, and when pushed hard the guitar has a strong growl, without becoming muddy. The pickups could be splittable too (they have 4 conductors). The neck is one of the most confortables I ever tried on a 7 strings guitar. It is a bit deeper that the Ibanez and way deeper than the Jackson (I find those necks to be too thin, anyway).The body is made of ash (it resonates really well, but is a bit heavy). All in all the guitar is well balanced, either sitting or standing.

What I don't like about the guitar is only a thing - the pickups could be splittable, but if you want to be able to, you should at least change the pots with some push-pull ones, or drill a pair of holes in the guitar to put a pair of selectors in it. They could think about it. The guitar has a gibson-like three way pickup selector, which limits you to three sounds.

As far as the construction goes, the single parts are a decent job, but the connection between the neck and the body is a bit too large.You could easily put a credit card between the neck's lower end and the body. And the dots are not well lined with the middle string (with the middle of the neck I mean).
Apart from those little flaws the instrument plays really well, and is really stable (thanks also to the fixed bridge).
I think I'm going to find a set neck one soon, but I'll continue to play this one too, as I feel really confortable abot the guitar.

Great value for the price, great pickups, good woods, decent workmanship. I could love this Schecter, if it only had a 5 way selector or two push-pull pots to get to the single coil sounds of the Duncan Designed pickups.