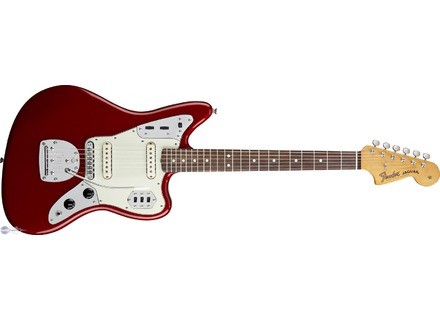 The history of these two models is not trivial. In 1958, Leo Fender, father of the famous Telecaster and Stratocaster, decided to take advantage of his reputation and try to seduce jazz guitarists with a model logically called the Jazzmaster. With a rosewood fingerboard, a floating vibrato, new pickups, and a warmer sound than the Stratocaster, Leo thought he'd please jazzmen at the time. Unfortunately, its tendency to feedback prompted them to ignore it. However, the Jazzmaster began to interest groups in the surf movement like The Ventures and The Fireballs. Leo, always on the lookout, took advantage of this interest and came out with a model specifically designed for the surf music scene in 1962: the Jaguar. With a shorter scale (24 inches), single coil Stratocaster-type pickups, 22 frets, a spring-loaded rubber string-mute, and a notched side plate that made it less prone to interference, it was the ultimate surf guitar. Unfortunately, the surf music scene went out of fashion in the 70's and production of Jaguars and Jazzmasters was stopped in 1980.

These models were then set aside for a few years until indie rock bands in the early 80s such as Sonic Youth or My Bloody Valentine saw in this guitar (which was affordable at the time and gave ample feedback), a good way to satisfy their experimental sound cravings. By strumming the strings behind the bridge they could get a unique chiming sound as well as produce sympathetic resonance due to the low break angle over the bridge. Following this rediscovery, the Jazzmaster and Jaguar were reintroduced into the Fender catalog in 1986 with Japanese 1962 Reissue models.

2008 saw the birth of the "Classic Player" series, made in Mexico and at relatively affordable prices. To celebrate their 50th anniversary a “revision” was in order ... This test will be of a Jazzmaster, a Jaguar with single coil pickups, and a Jaguar with Humbuckers.

For those who have never laid their hands on a Jazzmaster or a Jaguar, the first striking feature is the size of its asymmetric body, larger than that of a Telecaster or a Stratocaster. However, the balance is perfect, because the guitar was originally intended to be played seated (the jazzmen, remember!). The traditional main differences between the two models are both the short scale on the Jaguar (24 inches as opposed to the 25.5 inches on the Jazzmaster), and different pickups: P-90-type single coils on the Jazzmaster differ from the single Stratocaster-type ones on the Jaguar. The pickups on the Jazzmaster in fact have a warmer and rounder sound than those of the Jaguar, which are brighter.

As far as changes go, there are new pickups (Special Design Hot Single coils on the Jazzmaster and the Jaguar, and Enforcer humbuckers for the Jaguar HH) with a higher output level and thicker sound than the original models. Note that the pickups on the Jazzmaster have height adjustment screws, as do the P-90-type pickups. A Tune-O-Matic-type bridge resolves the "jumping strings" and intonation issues of previous models. In addition, the floating tremolo has been moved in closer to the bridge and the angle of the strings in relation to the bridge is now greater. This will increase sustain and reduce sympathetic string resonances behind the bridge. You lose that little characteristic chiming sound that was obtained by strumming the strings behind the bridge (Sonic Youth loved that sound). With this new bridge and the the fact that the tremolo has been moved in closer, it loses a little of the character of the original guitar, but gains in accuracy and stability.

For the maple neck, Fender has chosen a "C" shape, a rosewood fingerboard, a 9.5 inch radius (flatter than the original), 21 medium jumbo frets (for the Jazzmaster and 22 for the Jaguar). The body is alder for all three models and hardware is Fender/Ping vintage style.

As for looks, be aware that the Jazzmaster is available in black or sunburst finishes with a 4-ply Brown Shell pickguard, the Jaguar special (single coils) in red or sunburst, and the Jaguar HH (humbuckers) in white or sunburst. Lastly, the guitars are delivered in a gig bag and hardware is chrome.

As for electronics, the Jazzmaster has two independent circuits (lead and rhythm) via a selectable 2 position switch, each with their own volume and tone. There's the classic three-position switch for selecting pickups (neck, bridge or both). The Jaguar with single coils replaces the 3-position switch with a system combining three 2-position switches. The first two switches enable/disable the bridge and neck pickups respectively while the third switch activates a high-pass filter. This filter lets you easily pierce through a mix! Lastly, the Jaguar with humbuckers has even more possibilities! There's, in addition to the adjustments mentioned above, a master kill switch that lets you completely cut the sound of the guitar, and two controls to mix the humbucker sound with the split sound( Humbucking/Single-Coil Blend Control), and this for each pickup. The sonic possibilities of this guitar are enormous!

The craftsmanship on these guitars seems flawless and there weren't any intonation issues during the test. The neck is agreeable to play and one will quickly find their bearings, while the hardware seems built to last. As for controls,only the Jaguar HH may pose some problems at first: for novices, the number of knobs/switches takes some getting used to, especially in gigs where stress can complicate things.

Once plugged in, one is surprised by the power delivered by the pickups. The Jazzmaster has a sweet sound but which is quite thick and with a significant output level for single coils. It allows you a bit of versatility in terms of sound with good clean tones that are rich and full.

The few sound samples were recorded with a Sennheiser MD 421 microphone in front of a Brunetti Mercury EL34 amp. Here's a sample of the “clean” sound palette of the Jazzmaster: clean1, clean2, clean3, clean4, cleanchords and cleanfunk. And three examples in overdrive: ovd1, ovd2 and ovd3.

The Jaguar with single coils is similar to a Telecaster with its chimey sounds; true happiness for clean-sound lovers! Nevertheless, distorted/overdrive sounds are also quite nice: it's got that twang that we all know and love! Examples: dist1, dist2 and dist3.

Lastly, the Jaguar HH, with two humbuckers, is the overdrive king. It's simply a joy to play in drop D with the distortion pedal on! It's heavy and fat with sparks flying everywhere (ex1, 2 & 3)! Cobain fans will be thrilled. The opportunity to mix in the split pickup sound gives some interesting results in clean and overdrive (ex1, 2 & 3) and, as said before, gives the guitar enormous sound possibilities. The knobs can certainly be difficult to master at first, but it's worth the effort.

It's difficult to to be picky when confronted with these guitars! They look and sound great and are a joy to play. The only criticism that can be made by Jazzmaster/Jaguar traditionalists might be about the changes made to the bridge and tremolo location. While they facilitate adjustments and improve intonation to some extent, they slightly change the original character of these models . But for an average price of around $900, Fender delivers high quality guitars. Yes, they're made in Mexico, but hold their own when compared to certain more expensive models. It's a good reason to take the plunge and buy one of these mythical guitars!