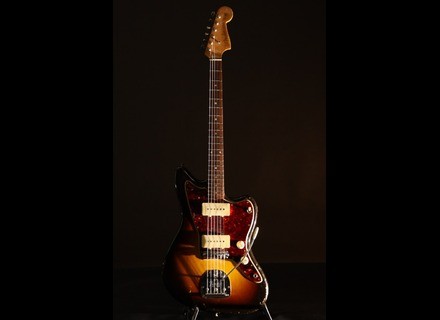 Jazzmaster [1958-1980], Electric solidbody guitar with JZ/JG body from Fender in the Jazzmaster series.

These MODELS Japanese have little envy amricains MODELS (I tried both) Trs good quality instrument making (at least on The models in 2003 - with a serial number beginning with a Q; a rumor that the productions postrieures are slightly less good). The pickups are trs MODELS correct these, but better to change them (the Seymour Duncan are parat it, excellent.

Now, the bulk of the Jazzmaster default: an easel design stupid. On the one hand, the strings move sometimes when buggers. On the other hand, the guitar buzz a lot because of this attachment Systm ropes (ropes hanging bridge and at least twenty centimtres below)
So derrire the bridge, the strings of power failure o the parasite rather lightweight, but pnible over time. But the problem can be easily rsolu by installing a Mustang bridge (30 10 seconds to install), prservant of many worries. You can also climb ropes trs deep draft or install a system that spcial, screwed the front of vibrato, which gives the tension in the strings derrire the bridge - but it is far from 'lgant be ...
Another small problem with this page ... easel, the SETTING THE height of the strings is complicated DIY trs same.
So in 10/10 CHARACTERISTICS for a bridge with Jazzmaster Mustang (one wonders why Fender does not install them in SERIES)

All those who have tried my guitar t have all agreed: The handle is incredibly comfortable, it is immediately comfortable.
I love the shape of the Jazzmaster. Nice shape and large body, it is quite heavy, but we are still far from the trs weight of a Les Paul. The only small problem is that, given the scale - much suprieures that of a stratum or tl the Jazzmaster does not fit into the standard guitars tuis.
The sound is magical no matter what the position of microphones selected ... Trs good sustain for a fender, but also a standard precision ...

I love this guitar compltement. She knows everything, but its fawn. I never jou on a guitar that had so many characters. It is recognizable agreement jou.

On the micro serious clean sounds are relatively dry and prcis without being too cold, cold compresses are incredibly soft and treble trs.
Intermdiaire position - low and high shuffled his trs dry and cold, magical lights on my amp, it produces a natural espce chorus is just amazing to hear ...
Micro acute: the ultra slamming, pchu wish, relatively bold, but especially acute for a fte. Cocks for rhythm.

Attention, unlike the rumor, the Jazzmaster is trs comfortable in saturation and big sound. But all dpend the amp used. With a boss OD-1 pedals, I never make a sound saturated russi correct. But with my prampli lamps, this guitar is the road sacrment saturation.

Otherwise, this guitar is may be not as good as the stratum or P for solos, but I find that even in this area - which may be its weak point, it is far from be ridiculous.

Finally, an incredible, versatile and extremely typ. This guitar sounds magical, just listen to the Cure, Sonic Youth, God Speed ​​You Black Emperor, Pulp, Radiohead, Dinosaur Junior ... We can do everything with this guitar, except the TRS can be big sound - mtal, hard rock super heavy.

For me, the most beautiful guitar in the world.
I do not know anyone who has tried this without scratching compltement fall in love ...
I've had six months and I do not think I get bored one day, I sell it for anything.
Looking for a fender moves away from strotype Start, this guitar is for you!
See the source
Did you find this review helpful?yesno