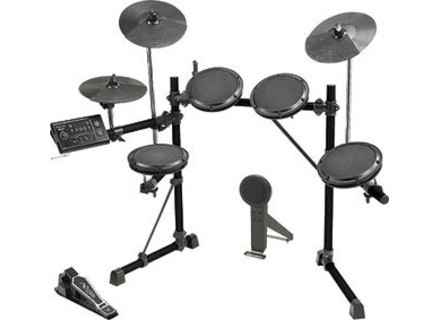 View other reviews for this product:
I bought it at the start of last week and got it a couple of days later. It comes in two big boxes with several tiny ones inside. You open all boxes full of excitement and it's already to be set up. The manual isn't very explicit and you will really need to look at the drawings several times to know how to assemble the kit. I needed roughly half an hour.
Once everything was connected; I turned it on, played and it worked.
I think it looks nice and the round cymbals (not just a quarter of a circle) add to its elegance.

All pads are mono (cymbals included).
The sounds of the module aren't terrific. I bought this kit to progress at home, after several years playing an acoustic set, so I was expecting acoustic sounds. I won't say anything about the electronic sounds, nor the whistles, which are funnier than they are realistic. And it's true that I've had a hard time finding acoustic sounds that please me, despite the vast number of snares, toms and kicks (cymbals and hi-hats are pretty limited) available. You can eventually apply a pitch to the sound to modify it a bit, but it doesn't change things that much (at the most, it's useful to simulate an 18" crash with a 16" one, for instance).

I had the chance to test just another e-drum kit, a yamaha dtexplorer, but its sound didn't convince me either. It might be I'm hard to please...

The MIDI output indicates that you can connect it to a computer and use a sampler with pre-recorded sounds, which I have yet to test.

It seems that the hi-hat pedal has some issues on my model because I can get open hi-hat sounds when the pedal is down.

I was able to get my Pearl double-kick pedal and it works so-so. Since the sensor has to be at the center, the beaters are off-axis, which means you have to kick hard to hear the kick on the headphones. But other than that, it works fine.
The velocity is managed well, but it has no multi-sampling, so ghost notes don't sound very good!

To conclude, I agree with triptonyo and think its value for money is really good.
What's more, I think you can even improve it gradually without spending too much money. I'll edit my review as time goes by.
Did you find this review helpful?yesno
Cookies help us improve performance, enhance user experience and deliver our services. By using our services, you agree to our use of cookies. Find out more.