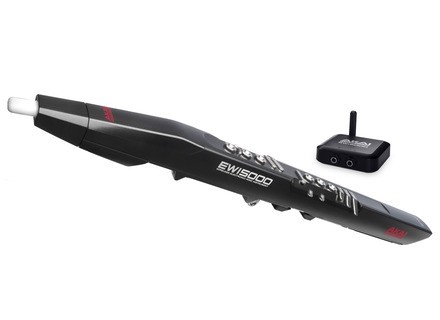 Value For Money : Excellent Audience: Anyone
Buy this productView price information >
View other reviews for this product:
The Ewi 5000 is an extremely versatile professional sounding piece of kit and can be used at any level despite the price tag which is fairly modest. It gets four stars because of the poorly documented manual information. In my opinion it does not have enough usable and inspiring sounds, just 100 of which I only really like a handful. I had to seek out and buy the old 1990's Yahama VL70-m sound module to compensate. This issue seems to have been addressed in the design of the newer EWI Solo which supposedly has 280 patches.

Also unlike its predecessor the Ewi 4000, the Ewi 5000 has been stripped of its capacity to upload into it new sound patches. It seems the manufacturers felt it was better to create your own sounds rather than buy them from external vendors. Its onboard sound library of patches has been given a little more adaptability and accessibility by including the capacity to modify a copy of the internal pre-set library within a separate user library with an additional 100 banks. This is done using the supplied dedicated software program. But dont be fooled!!, this is only great if you know anything about Synthesizer programming (Which most people don't). I discovered that programming a synthesizer in itself is a science that is studied at university level. You can however order from Bernie Kenerson's website (mizmor@sc.rr.com) for under $40.00 (USD) a set of predefined settings for the user interface that modifies and improves each of the Ewi's various internal sounds and also gives some inkling to approaching synthesizer programming by example. The user manual is poor with regard to this and does not explain how/where to start. In fact like most manuals it is generally useless with regard to getting started. If not for Alistair Parnell's detailed and very useful series on Youtube I would still be in the dark.
I like the fact that it has multiple connectivity modes but dont bother with the wireless transmitter, This is outdated technology which has already been superseded. Besides it has to be powered so its not really wireless. I use one of those tiny Harley Benton Transmitters a lot more efficient with a greater range.
Did you find this review helpful?yesno
Cookies help us improve performance, enhance user experience and deliver our services. By using our services, you agree to our use of cookies. Find out more.