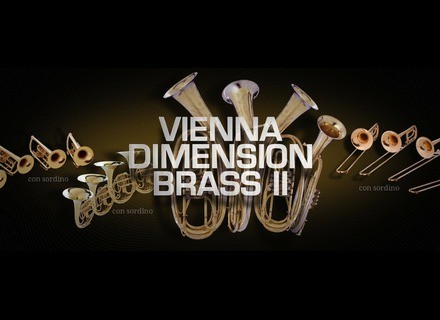 This new edition of the Vienna Dimension Brass Standard Library features four ensembles with four instruments each: muted trumpets, french horns and trombones, as well as a fourth ensemble with Wagner Tubas, which reproduces the instruments originally created for the Nibelung’s Ring.

The ensembles were recorded in groups, but each player had its own microphone so you can access each instrument individually.

Vienna Dimension Brass II feature 68,084 samples in total. VSL recommends you use it with Vienna Instruments Pro, though it can be played with the included Player, but the Pro version gives you access to additional features such as volume control, musician position, auto-divisi mode and humanization presets.

Vienna Dimension Brass II is available for the introductory price of 495 € instead of 595 € until July 31st. You’ll receive the trumpet, trombones and Wagner tubas first, the french horn section will be available in a few weeks. The library is also included in the Brass Bundle, Vienna Super Package and Winds Complete. More info at www.vsl.co.at.