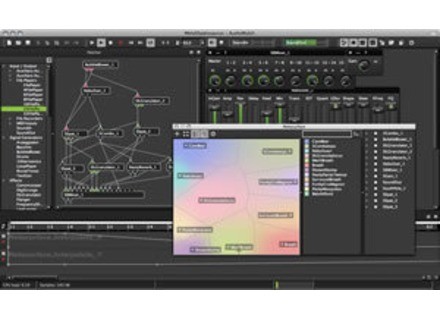 After three years in development, version 2.0 of the software introduces new features and brings AudioMulch to the Mac.

AudioMulch 2.0 features a user interface update, with work-flow improvements including drag-and-drop patching that add to AudioMulch's appeal as a live performance environment, according to the company. Other version 2.0 additions include patchable MIDI routing, a new pattern editor, significant performance increases for audio processing, and new automation features, including the ability to automate and MIDI control AudioMulch's "Metasurface" controller.

AudioMulch is designed for musical audio processing, composition, and performance. Its modular patcher-style user interface is designed to "promote an improvisational approach to music making," they say. The software offers a range of built in sound processing and audio mangling tools along with parameter control capabilities that include time line automation, a powerful MIDI control mapping system and the "Metasurface" multi-parameter controller.

Windows and Mac OS X versions of AudioMulch 2.0 can be downloaded from the AudioMulch website, and trialled free for up to 60 days. A version 2.0 license can be purchased for $189, or as an $89 upgrade for version 1.0 users.