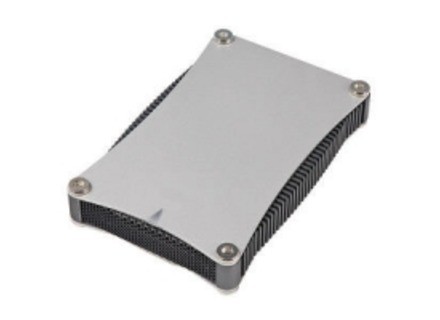 View other reviews for this product:
This is the second Glyph external hard drive I've purchased, and they're awesome - never a problem, they just function as they should. I use both hard drives for Pro Tools, and I've used them with M-Powered on Windows format and now with HD on Mac format. Never a glitch recording straight to these hard drives or pulling samples for memory hogs like BFD2 from them.

It's rather unrealistic to expect any drive to be TOTALLY silent... although I must say my Glyph drive is, in my opinion, astonishingly quiet. A few simple precautions keep any fan noise out of my recordings, which are made in the same room as the computer and two external fan-cooled drives. The drives both reside on shelves under my desk, with just a little acoustic foam on the surfaces close to them, as well as some other sound-absorbent office supplies like stacks of paper nearby (taking care not to block the vents on the drives, of course). I've been very satisfied with the Glyph drive, which set up perfectly the first time and has always behaved as one would hope.

My iTunes collection also resides on it, and despite the immense number of files, access has been much, much faster with the Glyph drive than with my consumer-level LaCie Quadra 2. I was also very excited that the variety of connection options on the Glyph helped me cope with the dearth of Firewire ports on my Mac; right now I'm running my MOTU traveler into the Glyph's FW400 port, then the Glyph's FW800 port to the Mac... works incredibly well. I'm currently planning to buy two more Glyph drives for video and archiving. Anyhoo, I don't claim to be an expert on peripherals by any means, but I must say I've been completely satisfied with my Glyph drive and feel it was an excellent purchase, and one I would heartily recommend to anyone.