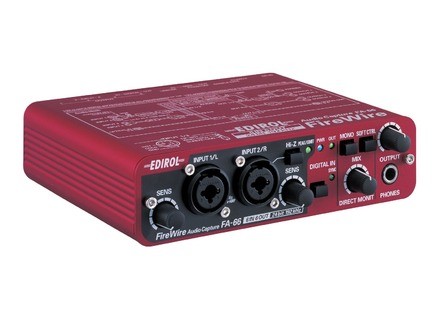 View other reviews for this product:
I was looking amliorer the sound of my piano recordings. I used two AKG microphones 3000, a Behringer prampli Ultragain and a TASCAM CD. I replaced the burner pramp and the FA 66 and a PC.

The installation went well, feeling a little because it is the very first time I use the hardware for recording on PC. But carefully following the manual, it's good!

The map book was bought in Playback with its pilots but software. In this config, it can serve as priph audio output (think of frquence rgler the Sampling of 48 kHz ...). To register, you need a lociciel. Wavelab had to mount my recordings and it works! I record tracks in 2 x 16 bits x 44.1 kHz. I tried in 2 tracks x 24 bits x 192 kHz: it works but the sound is not better and the sound rsiduel, mic sensitivity of the mini is 10 dB stronger that in 44.1.

How long have you use it? Yesterday ...
Previous compared my config, there's no contest: the sound is better, more transparent. It is probably for the disappearance of the color of the Ultragain. Tight deadlines that when I pass a basic console Behringer's Ultragain, I also found a amlioration.
Question: always keeping the same microphones, do I still have a better sound?
Finally, as I find the sound really good!

EDIT AOT 17 2011
The above notice date of 2005. I happily used this card for two years before replacing it with an RME Fireface 400. I just sell it because it served me more that listening to music on the internet and I replaced it for this purpose by an RME Babyface (who s'avre less touchy when used both as main Windows audio device and peripherals such as ASIO, kind of debauchery that the FA-66 and Figure n'apprcie reported by becoming mute until this that we restart Windows). Just before sending the new Owner ', I have my new branch microphones (which are no longer the AKG but CMC6 Schoeps MK21-...) to compare the most prestigious collgue . I used two PCs and a rpartiteur microphone to record the same socket with two interfaces (see photo). A bit of Beethoven (Take 1 gross) and some Schubert (2 + taken + rverb legalization), costs quickly: to record with two microphones, difficult to justify the price two times the lev Fireface ... You can judge diffrent: 4 files mp3 320 kbit / s are here: https://www.mediafire.com/?4npcca968syz5