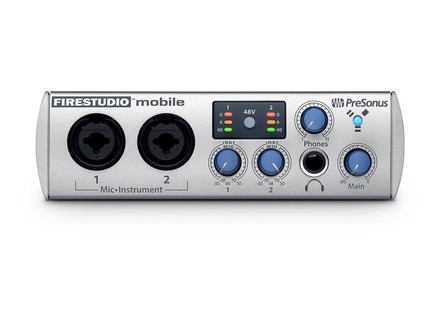 « It Has Become An Overpriced Volume Knob »
2

View other reviews for this product:
I chose this expecting it to be a simple input device to go from my analog technics turnatbles and mixer into my computer. I'm running Windows 8.1 on a first generation Intel Pentium i7 2.3 Gigahertz with 24 Gigs of Ram and an Intel Solid State drive for the OS with a secondary 3Gig hard drive for storage. I have never been able to get The Firestudio Mobile or The Presonus Studio One to work with my computer which runs photoshop and other programs of high intensity with no problem. The device just simply never stays synced. I've tried running it with Cubase, fruity loops, Adobe Audition and even the native Presonus Studio One recording software that came with the Firestudio Mobile and none of them work because of the synchronization issue. I talked to someone at Guitar center about it and they stated that some of the earlier models were flawed and did not work properly with window 8. The Presonus website states otherwise and I've tried downloading the latest drivers and firmware for the device but it still acts up and Presonus Studio One Freezes every time on launch and stays there even when trying to force close it through the task manager command prompt. Basically it has turned into a device that only allows me to use it as an overglorified volume control knob for my KRK V8 studio monitors. Absolutely ridiculous!

Loses connection and synchronization often, can;t even get it to work.

Tons of problems with compatibility. They may eventually fix this but I have had problems since day one that have never been solved no matter how many new downloads I've tried.

It has plenty of inputs for the size of the device but the compatibility issues just kill this device for me. It also has really bad distortion if it hits red. No soft clip, just a hard distorted clipping problem so watch your levels carefully.
Did you find this review helpful?yesno