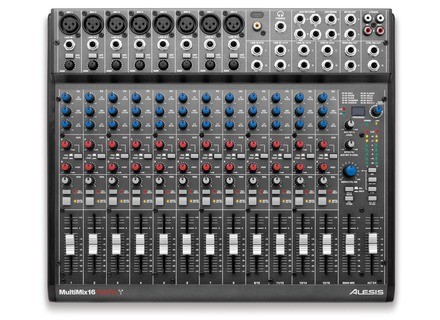 MultiMix 16 FireWire, FireWire/USB/mLan Mixer from Alesis in the MultiMix series.

Value For Money : Excellent Audience: Beginners
View other reviews for this product:
I bought it used at 250 €, I use home studio and on stage with my band since May 2014 (so 6 months at the time of this writing). This is not my first mixing desk so point of comparison, but I guess at that price converters must not be the best in the market. However, I am particularly pleased and opportunities offered through the firewire interface.

I discovered this table via a musician friend who has the same USB-2 release. on the other hand with hers has a problem: after one to two hours of operation PC "loses" the table have to disconnect and reconnect the USB-to make it working again. So when I saw on Leboncoin the same FW version, I jumped on it!

From my side I had a little problem with the firewire because my PC only see partially the table detected by windows (like when you plug a USB device), but invisible in the audio and impossible Device Manager to load the driver ASIO Alesis Cubase. After 3 weeks of mail exchange with the service Alesis UK they determined that it was a problem of incompatibility between the driver of my firewire PCI VIA chipset and driver ASIO Alesis. I bought a FW card with Texas Instruments chipset and the problem was solved.

What I like about this table it is mostly the sound card hand that can record simultaneously 16 independent tracks in Cubase. I do not know of any other model in other brands that allow less than 950 € (Presonus for example).

And the icing on the cake can be enjoyed on stage of Cubase insert effects, especially valuable for voice in order to have a balanced sound (Noisegate, Compressor, EQ, Vocal Rider, doubling the track with supercharging and light distortion, reverb, delay, etc ...), in short all the processing is usually done during a mix. To do so, simply snap on each slice of "Mute Alt 3/4" button at the fader "main mix" to press the "2TK to mix" button, and Cubase enable the monitoring of tracks to be returned to the table to stand in sound system.
In the end the table faders are used to manage the entry level, the Cubase mixer channel manages the mix that is sent over the sound system.

Small problem, however, for the management of stage monitors: if one branch returns like me on the output "send to", it comes out that the gross sound without Cubase treatment, no way not to use the effects of the table to the despair of singer singer who want to get along with reverb. I have found no other solution than to insert a small external effect rack so that they have the compression and reverb on their voices in their returns.

For integrated effects in the table: I only used them once (before I solve my problem incompatible firewire card).
There are 99 presets in total (Hall reverb 10x - 10x reverb Room - 10x Plate Reverb - Reverb Chamber 10x - 10x Chorus - Flanger 10x - 10x delay - 10x pitch - etc). Of course we can not only select a single, common to all tracks. I admit I have not really made the difference between the different reverb that sounded all more or less the same, which are anyway not editable.
I use Cubase rVerb or TrueVerb (home Waves) where everything is customizable, it's another planet, nothing to do with the integrated effects at the table! But hey, when no PC side, it's better than nothing.

Conclusion: Alesis Multimix ceased production of 8-12-16 there a few years ago, I mean those that multitrack recording. Instead they have released since the series "FX" that only allow recording of the mix in stereo, one wonders why. I think it was to reposition itself from the competition that is bcp more in multitrack recording.
Anyway for a low price opportunity is great stuff in terms of sound quality and possibilities with the couple Cubase PC-shuttered it.
See the source
Did you find this review helpful?yesno
Cookies help us improve performance, enhance user experience and deliver our services. By using our services, you agree to our use of cookies. Find out more.