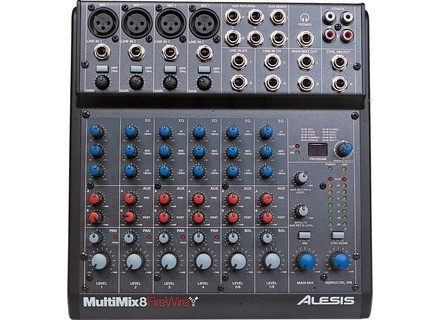 MultiMix 8 FireWire, FireWire/USB/mLan Mixer from Alesis in the MultiMix series.

View other reviews for this product:
It's perfect for what I do. I have a small amateur home studio and have a tonelab (tube preamp) and a behringer tube MIC200. So I have more than enough inputs.

I never use the effects on the mixer.

I give it 10/10 because it's perfect for my use as an amateur, pros should definitely looks elsewhere.

It's my first mixer/soundcard.
I've had some incompatibility problems with the audigy of my pc, but nothing serious.

What I love about this mixer is that the usual controls are directly accessible with the rotary knobs. That's actually the reason why I chose a mixer/soundcard rather than a rack-mountable and/or internal soundcard.

I love to have the controls within easy reach and not to be forced to change windows on Cubase to increase or decrease the volume and change other settings.

The manual isn't perfect. It lacks some clarity for beginners regarding some points, but it's nevertheless very useful.

As for transparency, it seems transparent to me, but I don't have the means to verify it.
I obviously have a different sound when I connect my tonelab to my Hot Rod Deluxe amp (with the same preset), but I think that has to do more with the coloration of the amp rather than the transparency of the soundcard itself. So I say yes.

I don't think the EQ is particularly precise and I prefer to use those of Cubase, which I think are more precise.

Most of my guitar takes (PRS CE 24) have surprised everybody who has heard them due to their quality. So I think it can be considered a good soundcard. 10/10

I've been using it for about 10 months.
What I like the most is the ease of use, the different inputs and its particularly short latency time. In short, its effectiveness.

I informed myself about other models, but unfortunately didn't test any of them.

I had to contact support due to a glitch I had during recordings. They replied the same day and were really effective. It was not grounded properly.

I wouldn't hesitate to buy it again because it covers all my needs.
Did you find this review helpful?yesno
Cookies help us improve performance, enhance user experience and deliver our services. By using our services, you agree to our use of cookies. Find out more.