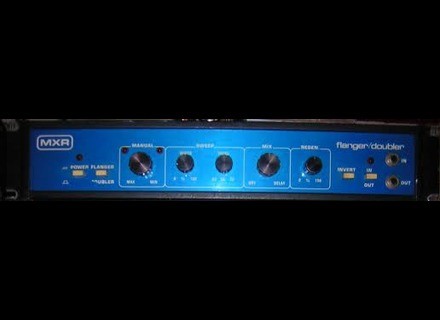 The MXR Flanger Doubler is an analog piece of outboard gear designed to give you flanger effects and a synthetic doubling. I don't know what sorts of connections it has in the back of it, but it has 1/4" TRS connections for input and output in the front. Since it was already in place in a rack when I used it, I never had a need to see what sorts of connections were in the back. It is rack mountable and will take up two spaces.

Using the MXR Flanger Doubler is pretty self explanatory for the most part. It has knobs for manual, sweep width, sweep speed, mix, and regen, as well as a button to choose between the flanger and the double, and other button for bypass and invert. As you can tell just by looking about the Flanger Double, it isn't a complicated unit. If you know a bit about modulation effects, you'll certainly recognize these parameters. If not, you should be able to catch on pretty quickly without the assistance of a manual.

While there are certain situations where the MXR Flanger Doubler wouldn't work for me, a lot of times I find this to be a very useful effect. At the worst it is a versatile flanger with doubling capabilities and a lot of cool possible effects. It is definitely on the thicker side of flanging effects that I've heard, while the doubler will definitely do exactly as advertised. However, this is really mostly a flanger effect with doubling capabilities, which is really just a certain type of flanging. I've used the MXR Flanger Doubler with vocals as well as electric guitar, both with awesome results.

The MXR Flanger Doubler isn't the type of effect that I use very often, but when I do have it around it is a nice thing as you never know when you might want a seriously thick sounding flanger. This is a great effect for electric guitar, but also is awesome for getting some spacey vocal sounds as well. I don't think that there are to many of these out there anymore, so it isn't the type of device that you can easily seek out. I will say that if you see one around in a studio and are looking for some great sounding flange, definitely give the Flanger Double a whirl.
Did you find this review helpful?yesno
Cookies help us improve performance, enhance user experience and deliver our services. By using our services, you agree to our use of cookies. Find out more.