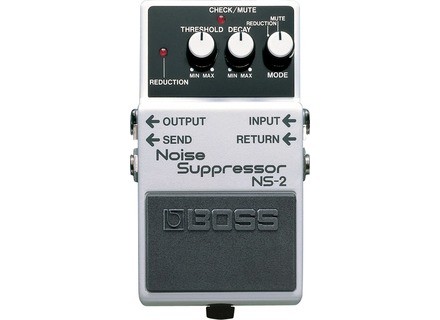 Buy this productView price information >
View other reviews for this product:
Noise is one of the things we higher gain players battle as we play on stage. One of the most annoying things out there is when your guitar starts to ring out and feedback, especially when you're in a metal band with fast start/stop riffs. Boss has been one of the go-to noise gate solutions for quite awhile now. The pedal features a decay, threshold and special selector knob to select between two different settings. You can also run this both in front of the amp AND in the loop at the same time.

The pedal itself is housed in one of the best housings out there. You won't have to worry about this thing breaking on you while you're on tour. The knobs are also laid out fairly decently, although I don't know why they spaced them the way they did. The manual is fairly clear as to what everything does, but I find that this pedal lacks versatility. I'll get to that later, but the pedal itself is simple enough to set up and go.

The pedal does what it should do. It cuts the feedback and lets you have silence while you're not playing. However, the issue is that this pedal sucks tone. It's one of the major things wrong with this pedal. Another one is that I seem to have issues with this when compared to the ISP Decimator. Where as the Decimator can do some great staccato gating, this seems to have some issues with the gating for whatever reason. The good thing is that this pedal can work in both the front and loop at the same time, but you'll want to be careful about ground loops. ISP now has a G-String which does the same thing, so I question whether this is really necessary today.

The pedal itself is solid, but there are better things on the market today. I vastly prefer the ISP stuff to the Boss stuff when it comes to noise gates. The Boss technology is just too outdated and doesn't sound as natural as the ISP does for the type of music I play. If you can get one of these cheap, get it. Otherwise, just get an ISP.
Did you find this review helpful?yesno
Cookies help us improve performance, enhance user experience and deliver our services. By using our services, you agree to our use of cookies. Find out more.