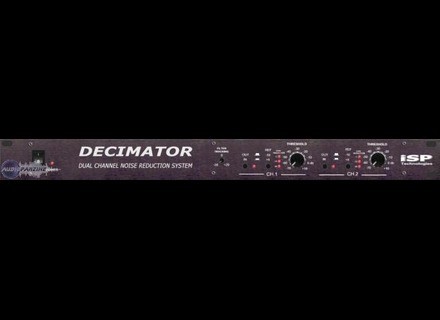 Buy this productView price information >
View other reviews for this product:
1U sound suppressor 19 '.

People ISP (in fact, it is those who had the cr Systm Rocktron Hush home) dvelopp have what they call the Time Vector Processing ... wholesale processor DTECT the signal just scratching the APRS and automatically applies SETTING THE decay to two channels ... and more problem of rglages between saturated and clean channels!

For the record, j'tais about to buy a Quad Noise Gate Drawmer from home, with 4 channels spars. I wanted to use just one channel APRS guitar, 1 channel for clean sounds and one for the full, the last 2 as automatically selected by switch my GRX-4. Thanks to the Decimator, I played a sore head in the final simplicity and even cash!

It's like razors with multiple blades, THE FIRST soulve the hair and cut deuxime: Well the password THE FIRST eliminates parasites output guitar (buzz, hum mass , single coil pickup, parasites, in short, it can get crowded!), and deuxime must eliminate the breath out of pramp, or unwanted feedback between the notes cheeks. I say "must eliminate" because indpendants both channels, you can also use it as a noise gate in Stereo output pramp, o l o well want in your cha no sound. But it is clear that the system does not work then Manir optimal.

You have to SETTING THE each channel of an on / off button, a knob for level rgler o you want to cut, with 3 LEDs to display the level of the cut, and a button s selection of the signal level of (-10dB or +4 dB). In addition, a dynamic filter knob you can (on two channels at the same time), move the range frequency drives for all your rglages.

In short, it's super simple!

I first made this: Guitar -> Decimator Channel 1 -> Preamp clear sound background -> background sound
I put the knob of attnuation bottom, and I went back down until hearing the buzz and other background noises. I started just above, to no longer have them.

Then I added (with pramp This time in saturated: pramp background -> Dcimator channel 2 -> background sound.
And ditto for the rglage. I ended up with a blast of near-zero output, and when I plated G chord, the cat of my neighbors became deaf, and I have lost 10 dB each ear ...

So great a work, then I pass into sound clear and everything is moving, is to say:
- No wind output
- The mug is saturated all the notes, you really have to wait for an agreement plate is caught by the buzz or shot by the noise-gate (the time is suprieur I can be Amen to live)
- In its clear notes do well, no effect type "battery use", where 4 is a note on food (except of course if you set the level of the ax ...)

I have not tried the Hush, I had one until the Boss NS-2, walking a lot ... but we change the CATEGORY. There are no frills, it achte to remove any sound other than his own, and after 5 minutes it's done, and done really well.

Here is an innovation that is good for all guitarists demanding for their sounds!
See the source
Did you find this review helpful?yesno
Cookies help us improve performance, enhance user experience and deliver our services. By using our services, you agree to our use of cookies. Find out more.