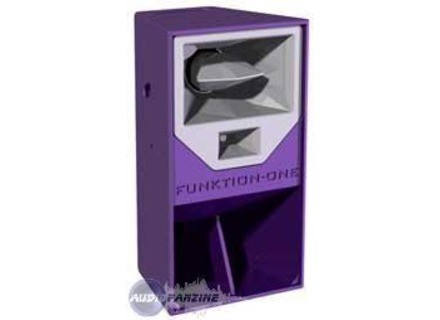 You should know, first of all that the brand Funktion One Has cre by the founders of Turbosound, Turbosound for those who know and Funktion One they will notice a resemblance easily. But quality level gnrale Fuktion-One is 100 times better.
The largest ingnieurs sound even qualifies as a mark as the best of his quil Systm have used. I do not make free advertising, but it is true that his record is a perfection. The very first time that my sound is ingnieurs utiliss the mark he could not believe the clarity of sound and ease of rglages.

Just to say
Funktion-One t declare it the best audio product Awad Live 2002.
On January 6, 2002, the largest touring Systm Funktion One assembled so far, has deployed and t Jamiroquai concert in standard DME Tokyo, an indoor arena 43 000. Tony and Ann Andrews with John Newsham taient place in Japan along with Masaaki Azuma of Japan and Try Funktion One Sound.
C'tait THE FIRST Systm use of a new attachment of Resolution 9 above a cluster with a width of 6 Resolution 5.
The sound ingnieur faade, Rick Pope adclar "This is the path for the future, the best sound exprience! When the security guy coming to tell you that sounds great it has a great leap forward !!!!"
Jamiroquai, itself declare it "It's amazing, the best sound I ever heard"

3 years, robust and lightweight Systm by contribution to the weight of Turbosound THL-4
which are powerful lquivalent Resolution-2.

What jadore cest in Funktion-One sound design is a perfect it must be said, of the same visual design casts.

For this forum, the Res-2, a system that is portable all in one compact LG Fully Systm flag!
Its a unique combination dexcellence sound.
The Resolution-2 is also well suited for musicians, professional DJs, and I especially recommend the ingnieur sound for concerts or lintrieur small collection's outdoor concert, until 1500 People for the largest concert there are Resolution-4 and 5 which are Ultra-Powerful and combines with the sub infrabass F218 and 2 x 18 "cest of pure madness!

Consisted of the non-random a box of my lease about this system so to test it as I'm falling ass jai heard the sound and power as Funktion-one made up ncessite 10db less than the competitor brands to reproduce the same sound level. I say to you, cest madness.

- How do you report qualitprix?
It is clear that its not given but contributions to other brands of quality trsrsonable price, to take one example, speakers Meyer (trs recognized by the pro) is much more the Funktion One and at the quality of performance, sound reproduction, and the strong Meyer can go to the bed.
- With the exprience, you do again this choice? ...

Without a doubt. for me the best cest Systm I know.
See the source
Did you find this review helpful?yesno
Cookies help us improve performance, enhance user experience and deliver our services. By using our services, you agree to our use of cookies. Find out more.