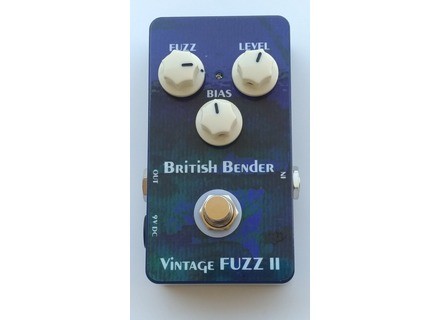 « Thick and Heavy Fuzz that Mimics the Tones of Led Zep, The Who and The Stones »
5

Value For Money : Correct Audience: Anyone
SOUND:
An aggressive fuzz with an edgy distorted quality, British Bender definitely is more boisterous than it is smooth, although that depends largely on how clean your clean amp channel is.

In that regard, I tried putting the British Bender (with Gain all the way down) before a dirty channel and it sounded better on clean channels. Bear in mind that I use three different preamps in the Victory Amp line – The Sheriff (plexi), The Countess (thick and chewy) and The Kraken (intense and edge). Perhaps a dirty channel from less aggressive dirty amps (like a Vox) would sound better, but I seemed to like the British Bender best on The Countess’ clean channel, which is very clean and glassy. Like most fuzz pedals the British Bender has Fuzz and Bias controls, for tweaking both saturation and that breakup quality. Even with both controls up relatively high the signal remains very clear in the mix and not muddy or muffled – and even with both controls up high heavy rhythm may sound a bit much (unless you like that thick Doom or Proto-Metal quality), but leads do sound absolutely velvety with great sustain. As for riffs and rhythm, I found middle register playing sounded better than deep drop-tuned type stuff (which makes sense, since this is based on a vintage pedal long before drop-tuning was in vogue).

OVERALL IMPRESSION:
A faithful reproduction of one of the most iconic fuzz models in guitar history, British Bender is characterized by its heavy sound and its ability to go into feedback. It consists of three Germanium NOS MP41 transistors to reproduce the sound of the classic Colorsound Tone Bender MKII. If you’re looking to get that grainy break-up rhythm effect or saturated and sustaining lead tone of Led Zeppelin, The Rolling Stones or The Who, the British Bender should be on your pedalboard. This fuzz sounds best on a clean channel, as the detail in the notes come through vividly and without competing with the dirt on higher-gain amp channels. Straight forward in use, add as much fuzz as you want (even with the Fuzz control down completely there is plenty of signal) and then make it smooth or edgy with the Bias. Overall, British Bender is highly unique in its tone and is not a typical fuzz pedal – as well, the characteristics of the sound whether playing rhythm or lead stand out very differently. British Bender is very aggressive with power chords, but sounds incredibly smooth and velvety when playing lead (ideal for those with a single clean amp channel in need of a solid lead tone). At 189 Euro the British Bender is not an inexpensive pedal, but its quality in parts and uniqueness of sound makes it a worthy consideration.

GENERAL USE:
Straight forward in its use, start with the Level around 9-o’clock and increase thereafter. There’s enough headroom with this pedal, and so start low. Presuming the Bias is down low (all the way counter-clockwise) the signal will be its smoothest. The Fuzz is very intense, even when turned all the way down, and sounds plenty heavy around the 10-o’clock mark. Increasing the Bias obviously adds a heavier, broken-up quality. For rhythm purposes I prefer a low Bias with Fuzz around 12-noon or less, but when playing lead I like both Fuzz and Bias around the 1-o’clock position. Obviously individual preferences may dictate otherwise, and I’m basing this on a very clean and glassy amp channel. Amps with more or less aggression will determine proper settings of the British Bender.

OTHER DETAILS:
A standard-sized pedal measuring about 113 mm (L) x 67mm (W) x 48mm (H) or 4.4 x 2.5 x 1.88 inches, British Benders weighs 235g/8.28oz. The heavy-duty metal chassis is powder coated dark blue shades/design with white lettering and white knobs. The three knobs (Level, Fuzz and Bias) are heavy plastic and will withstand normal use and abuse. All knobs have exceptional quality pots (smooth and very solid when turned without any static or noise). The footswitch (on/off) produces a solid click when engaged or disengaged without any unusual popping or noise. The chassis is a Hammond 1590B aluminum case that provides shielding of the electronic card. Under the cover is an internal voltage inverter so that the British Bender can be powered from a 9VDC power supply with isolated outputs or not. As well, the British Bender also includes high-end audio components (carbon resistors and Panasonic, Wima and Silver Mica capacitors), true-bypass Neutrik jacks, Alpha 16mm faders, and is protected against overvoltage and reverse polarity. The cable input/output and power supply all are located along the sides, and so some modest care is to be taken when used (to prevent foot slippage and possible chord input/output/power output damage). The British Bender does not run on batteries and requires a 9VDC power supply.