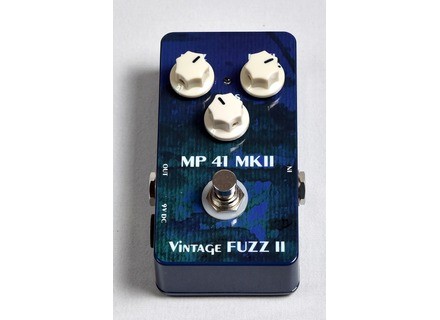 An outstanding job replicating that classic 1960s and into the 1970s heavy, thick fuzz sound, you can’t go wrong with the Vintage Fuzz II. With the Fuzz level up full you do not get that thin searing sizzle you hear from some more modern-day counterparts, but a slight breaking up quality that places the Vintage Fuzz II into the category of part fuzz, part distortion and part overdrive. As you turn back (reduce) the Fuzz level it produces a more distorted and thicker quality, which is even more obvious as you adjust the Bias level for a more stabbing or bubbling effect to the tone’s quality. And once you crank out some heavy riffs you can hear the emergence of early Black Sabbath and dark Metal. What makes the Vintage Fuzz II so useful is that it cleans up so nicely when you dial back your guitar’s volume. You can put the Fuzz level up high and get that famous vintage fuzz tone, but as you ease off on the guitar’s volume it sounds more crunchy and distorted… and without losing too much overall volume in the process. It sounds awesome on a clean amp channel (with a hint of gain), but works very well and adds a new dimension to a high-gain channel’s tone. When doing so, I found it best to ease off on the amp’s gain and then add in the Vintage Fuzz II at only quarter way on the Fuzz level for a huge sound.

OVERALL IMPRESSION:
Developed by Doc Music Station (France), Vintage Fuzz II (MP 41 MK 2 model) produces that classic hard-hitting fuzz tone at a fair price of 159 Euro. Denis (the designer of the Vintage Fuzz II) refers to this pedal as a Tone Bender, powered with three Germanium Russian NOS MP 41 transistors to help you attain the tones of Led Zeppelin, The Who and The Rolling Stones. I also hear quite clearly some Black Sabbath in the mix. The Fuzz knob on its own makes it sound great, and anywhere from a heavy breakup to a grainy sizzle (with a heavy sound that easily enters the feedback zone), but you can really makes some awesome tone changes in the attack and aggression by adjusting the Bias knob. This is one of the best fuzz pedals I have tried that actually mimics that early fuzz tone and is unlike many of the ‘modern’ fuzz pedals out there. Used with a clean amp or very carefully and sparingly with a high-gain amp, there is a ton of tonal options available, particularly as you adjust your guitar’s volume knob.

EASE OF USE:
The Vintage Fuzz II allows you to dial into somewhat smooth tones to thick and heavy tones. When you turn the Fuzz level all the way up, the tone becomes more saturated and smoother. However, even up full you get a nice grain and edge, while not being a smooth as more modern-day fuzzes (which is why this is a ‘Vintage’ Fuzz). As you dial back the Fuzz level it takes on more of a distorted or over-driven sound, which makes it less fuzz-like and, consequently, more diverse. Certainly there is some fuzz quality when dialed back, but it simply sounds edgier like a Fender Bassman amp being pushed to the limits. The Bias control, likewise, either keeps the signal smoother (turned all the way clockwise) or rougher around the edges with a stabbing quality (turned all the way counter-clockwise). The Level merely controls how loud the signal is, although the tone becomes more hardcore when you push the Level past 1-o’clock. Those three controls then need to be coordinated a bit, since as you increase Bias aggression the volume does increase. As you increase the Fuzz level the volume also increases (although it tends to stabilize around 1-o’clock). And, obviously, as the Level increases so too does the overall volume. The other minor coordinating factor is whether you adjust your guitar’s volume knob, since doing so does produce a different tone (besides affecting volume somewhat) and will affect the fuzz quality or characteristics.

RELIABILITY & DURABILITY:
Weighing 230g (8oz) and measuring in at 113 x 67 mm (about 4.25 x 2.25 inches), the Hammond 1590B aluminum case is both lightweight and provides shielding of the electronic card. The plastic knobs feel of good quality, and when turned the pots feel both solid and smooth in quality. The audio components comprise of carbon resistors, Wima silver mica capacitors, and the Vintage Fuzz is protected against over-voltage and reverse polarity. The cable input/output both are located on the sides, as well as the power supply insert (standard 9v 2.1 mm), and so there is minor concern with stomping and hitting any of the inputs/output. This true bypass pedal also has Neutrik jacks and Alpha 16mm faders for the Gain, Volume and Tone pots. The footswitch is somewhat close to the Bias knob, but that knob is of a good quality, and so any slight stomping pressure on the Bias knob should not pose any concern. The LED on/off light is small and well protected by the three knobs.