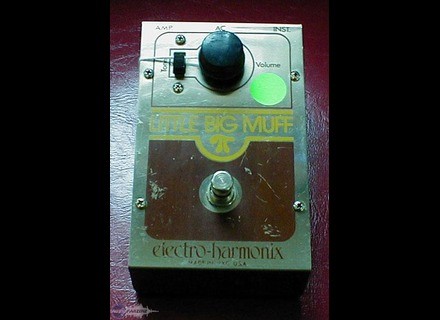 View other reviews for this product:
This is a smaller version of the Big Muff Pi. I have a 1980's version of it. It has a Volume knob and a tone switch. The sustain on it is set at a predetermined amount, but can be adjusted by rolling off of the volume knob. It has an 1/8" style plug, not a BOSS style, so it can't be daisy chained without an adapter for it. It's center negative and 9V DC.

It is VERY easy to use. Hook it in, set the tone switch to one of two options, set the volume so it's equal when bypassed and rock out. Super Easy to use, and super-easy to get a good sound out of.

This sounds a lot like the Big Muff Pi's they make today. Thick, hairy, and aggressive. I can't comment on an older one because I've never played them. The tone switch has to settings. The the top, it seems to add more treble, like the tone knob on a Big Muff is cranked. At the bottom, it seems like the tone knob on a Big Muff is at half or less. It's a very thick and bassy sounding fuzz/distortion. Like a full sized Big Muff Pi, it lies somewhere between a fuzz and a distortion, while simultaneously being not quite either.
The input is connected to the output via a buffer. Being an Electro Harmonix pedal, it's a good one. Not much treble loss while bypassed.

This is a great pedal. It sounds great and is very easy to use. I would still have it, but I don't like the Muff sound. I prefer a thinner, teblier, fuzzier fuzz. I am unbiased in rating this. It sounds great if you like the sound. This is one rockin' pedal that will keep rocking for a while longer.
Did you find this review helpful?yesno
Cookies help us improve performance, enhance user experience and deliver our services. By using our services, you agree to our use of cookies. Find out more.