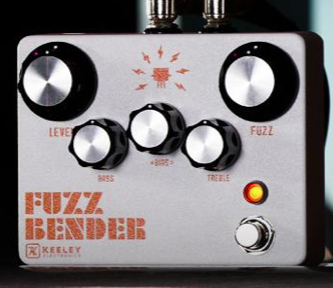 Publié le 05/10/19 à 03:40
Value For Money : Excellent
Audience: Anyone
SOUND:
This is a fuzz for fuzz lovers… and definitely not for the faint of heart (or those who dislike fuzz).

With the Bias down low (less agitation or burping) and the Fuzz as low as it can go, you start off with a good dose of fuzzzzzz (the extent depends on how low or high the Bass and Treble knobs are). Some fuzz pedals are more subtle, and they add some warmth, saturation or grain to an already clean or slightly dirty channel, e.g., David Gilmour’s tone. The Fuzz Bender, on the other hand starts off noticeably and simply continues to climb into thick and boisterous proto-metal, psychedelic doom. And because the Fuzz Bender has both Silicon and Germanium gain stages, you get a more subtle fuzz tone when the Fuzz knob is turned more toward the left, whereas you get a thicker and more saturated tone with the Fuzz knob turned toward the right. There is an increase in volume as you crank the Fuzz knob, but nothing excessive (which is good, and which means you don’t have to constantly adjust the Level knob every time you tweak the Fuzz knob). The Bias knob increases the spit to the point of splatter – so much so that the Fuzz Bender almost sounds gated as you riff out some choppy double-stops while in that position. The two tone knobs, Bass and Treble, add some great impact in the overall tone, from thick heavy bass to a sizzling treble, and definitely add to the volume (they act as boosters to the main signal). I suspect there is such great range in the Bass and Treble (from fully off to up fully) to accommodate muddy vs. thin pickups, but also to accommodate bass guitars. The Fuzz Bender offers some serious tone sculpting and unique, wide- ranging fuzz sounds from smooth to breaking-up obliteration.

OVERALL IMPRESSION:
A 3-transistor hybrid fuzz with bias control, I consider this pedal to be an ‘over-the-top’ fuzz when you want some thick, massive tones, whether smooth or broken-up (via the Bias). Even with the Fuzz turned all the way down (and the pedal engaged) there is an obvious moderately-heavy fuzz tone, which only accentuates as you crank up the levels. The only way to keep it subtle is to keep the Bass and Treble controls low and while dialing back on your guitar’s volume. The Bias offers anything from ‘off’ (no effect) to slight breaking up, to a splattering and almost gated type effect, making it ideal for choppy syncopated rhythms. The Tone controls are fabulous, in that you can get that searing trebly fuzz tone or that deep and heavy Doom metal type of quality. There is a massive amount of headroom with this pedal, and you can feel the air being pushed – particularly as you crank up the Volume and Bass. Robert Keeley is known for making quality pedals (at great prices) that sound darn good, and the Fuzz Bender is no exception. At $149 this pedal is both affordable and a must-have for Fuzz aficionados. I have tested, played and reviewed several fuzz pedals and the Fuzz Bender has carved its own niche for sound, diversity and uniqueness.

GENERAL USE:
Volume or output is controlled by the Level; turn it down when first engaging the Fuzz (and powering up your gear). The Fuzz Bender has a lot of headroom, and so I find keeping the Level around 9-10 o’clock sufficient in most cases. The quality or nature of the Fuzz is relative to where you place the Fuzz knob – the more you turn it counter-clockwise, the more subtle the fuzz flavor, whereas the more you turn it clockwise, the more saturated and heavier the fuzz. Obviously there is a mixing and meshing of the two, with the extent depending on where you dial in your sound. The Bias offers a lot of splat, and it produces a breaking-up quality even when turned up slightly to about 8-9 o’clock, and then burps like crazy from 12-noon onward. The Bass and Treble knobs are awesome; you get sizzling bright fuzz that cuts through the mix, but also a super heavy Doom and Gloom fuzz that is dark, but still defined in its character (or anything between). The heaviness of the Bass becomes apparent around 12-noon and beyond, whereas that cutting-edge Treble seems to hit hard at 3-o’clock. Of course, these specs are based on a thick and warm preamp (The Countess V4 by Victory) and the Petrucci MESA 4x12 cabinet (which is considered ‘dark’) that I used in the demo.

OTHER DETAILS:
A medium-sized pedal the Fuzz Bender measures 112 mm (L) x 90mm (W) x 55mm (H) with knobs (4.4 x 3.5 x 2.16 inches). The heavy duty chassis has a feel of steel (by its weight), although it could be aluminum. It has a powder coated white paint job with orange lettering/graphics. Coupled with the extra large knobs (the Level and Fuzz seem large enough to turn with a foot) the pedal definitely has a retro vibe to it, as though working with an old transistor radio. The footswitch produces a solid click when the pedal is engaged and disengaged. All five knobs, controlling Level, Fuzz, Bass, Treble and Bias are heavy plastic and could withstand any foot stomping that may drift in their directions (adding a ‘tallboy’ Barefoot Button would have a foot tower over the knobs). All knobs have good quality pots (smooth and solid when turned). The cable input and output, as well as the power input is located in the back, which saves on pedalboard space, but also keeps them in a more secure location. The Fuzz Bender does not work via battery power and requires a standard 9VDC (center -) power supply, while consuming only 15mA of power.