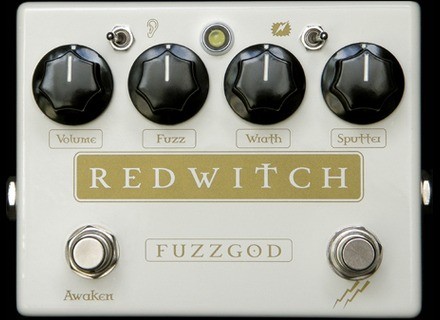 Music is universal — even people in New Zealand, who live down under, play music. They even make guitar stompboxes. And of course, that's what interests us more here at AudioFanzine. Focus on four analog stompboxes...

While sheep proliferate in the wide, green and shimmering plains of New Zealand's countryside, a small company based on the east coast of the North Island manufactures and sells fully analog guitar effect pedals. Why? Who knows! Perhaps they love guitars, or they hate woolly animals, rugby and netball — a female sport similar to basketball. However that may be, their stompboxes crossed half the earth to land up on my desk. After an appropriate Haka (the Maori ritual dance), I grabbed my knife and opened the cardboard box (which, surprisingly, came the right side up!) 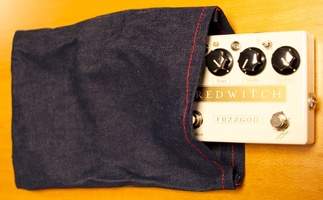 Something is sure: New Zealanders make things very good! Inside each small box, you'll find the product itself and a nice denim bag to protect it against dust and during transport. The weight of the pedal and the rugged metal housing give you an immediate feeling of robustness when holding it in your hand. The unit features high-quality controls, connections and switches. The silkscreen is easily readable even if a bit enigmatic. As hard as you try you won't find manufacturing faults!

Just like James Cook did when mapping the sheep island back in his time, we will look into every detail of the products we received. We'll start with the golden Fuzz God effect... 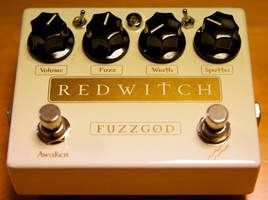 The stompbox offers basic connections (one in, one out) as well as four controls, two switches and two footswitches. On the left, the volume control determines the output volume, but not only that: through the last 20% of its rotation it adds a treble booster so that the tone becomes more aggressive. The Fuzz setting allows you to control the distortion amount from a gentle fuzz to steamroller sound. To activate the Fuzz God's Wrath you'll have to press the footswitch on the bottom right (the one with the lightnings). This will result in a even more chaotic sound that will make your guitar scream (the other footswitch controls the true bypass). Note that the Wrath control interacts with the Fuzz and Sputter settings. With higher values, you get a very long sustain and interesting low-frequency harmonics. The Sputter setting allows you to shred the sound or smooth it. Just try to find out the setting you like most. Considering that the controls interact, you'll have to proceed by trial and error! Finally, the small switches above the controls allow you to double the gain amount (!) and to activate a high-frequency boost. A LED indicates that the effect is on. The pedal can be powered with a 9V battery or a Boss-type external PSU.

All in all, we like the sound of this fuzz pedal. Its settings allow you to get a very wide sound palette, ranging from smooth and creamy to aggressive and rough. Some controls affect the bias directly and thus generate crackles when you turn them — don't panic, it's totally normal! Moreover, you can open the housing to set the general bias of the transistors to get an even smoother sound. We love the lightning mode that allows you to create really interesting sounds via the Wrath control — somewhere between a huge feedback and a theremin, thanks to an oscillator. Noisy guitar players will love it! The Sputter control works a bit like a rough gate that breaks up the guitar sound. Awesome! Only the high-frequency boost switch didn't quite convince us because we couldn't really hear any difference... Make your own opinion with the following sound samples:

Let's go on with the Pentavocal Tremolo, which is, as its name implies, a tremolo effect pedal. It looks just like the previous stompbox — in green. It is equipped with a pair of footswitches, four controls and a four-way selector. The right footswitch turns the effect on while the left one allows you to switch between a smooth tone (sinus) and a harder effect (square wave). 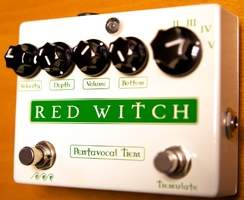 Use the Velocity control to vary the effect speed, the Depth control to adjust the deepness of the effect (volume attenuations will be more or less exaggerated) and the Volume control to amplify/attenuate the output volume. The latter is very convenient to compensate the feeling of volume loss that often occurs with tremolo effects. The stompbox distinguishes itself from competitor products thanks to its Bottom control. This setting allows you to add low-cut or low-pass filtering proportional to the volume decrease. In other words, turning it counterclockwise progressively adds a low-cut filter when the volume decreases, while turning it clockwise adds a low-pass filter. In the middle position, is it neutral. As the following sound samples show, the effect character changes radically when you turn this knob, which is a very good thing!

Last but not least, the four-way rotary selector allows you to choose between four different voicings, from brightest to darkest. Once again, the samples show that the voicings produce very different sounds... Thus, this tremolo doesn't only reduce the volume cyclically! We just miss a tap tempo function, even if we know it's impossible with a fully analog effect like this one! We must also mention that, like the Fuzz God II, this effect can be powered either with a 9V battery or an external PSU. 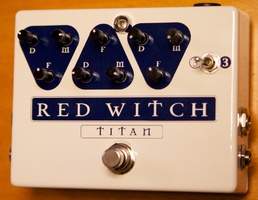 The third effect pedal we tried out is the Titan, a triple analog delay with up to 800 ms. The concept is simple: imagine you have three independent delay stompboxes you can connect in series or in parallel. The switch on the right allows you to toggle between both wirings, which radically changes the behavior of the unit. Either the input signal feeds all three delays at the same time, or it successively feeds the first, then the second and then the third one. The level is higher in series because the gain stages are added. The other settings are very simple (but the knobs are small which is not very practical if you have big fingers!): for each delay stage, you get a Delay control to adjust the delay time up to 800 ms, a Feedback control to control the number of repetitions, and a Mix control to adjust the balance between dry and wet sound. Nothing new! But the stompbox uniqueness comes from its effect loop that allows you to insert a fuzz, chorus or any other effect pedal that comes to your mind... or your feet!

The only disadvantage is that the effect loop only affects the third delay stage (to the right, on the front panel). It would be better if it worked on all three delays... We don't quite understand the reason for this technical and artistic limitation. Note: the pedal doesn't work with a battery but only with a standard external PSU.

We really like the sound of this stompbox that allows for psychedelic atmospheres or interesting rhythmic sequences. The ability to choose between series and parallel wiring increases possibilities enormously. The same applies to the effect loop if you already own a rich collection of stompboxes. We had a blast trying everything out and got some quite unique results. A delight for sound tweakers and explorers! 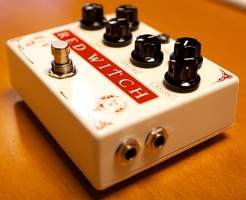 The last stompbox we reviewed is called Medusa and combines two different effects in one stompbox. After five long years of absence —in spite of its huge success among guitar players— the Medusa is back to allow guitar players to activate a tremolo and a chorus effect simultaneously or separately. In fact, only very few people could get the first Medusa launched in 2004 — there were only 74 units ever manufactured. But it doesn't matter now because the guys at Red Witch decided to take the circuit diagram out and launch a new version... which is even better!

The pedal provides no less than six controls to set the chorus and tremolo. Note that both effects are perfectly in sync when they are activated simultaneously. The pedal is equipped with an input, an expression pedal connector and a stereo out with two 1/4" jacks. The sound samples are mono because we had only one amp for the review. Note that the stereo mode works only when the chorus effect is activated, i.e. the tremolo always stays mono. In stereo mode, the effect signal is delivered through the first output while the dry signal comes out the second output. In other words, the chorus effect is not really stereo and its name is inappropriate. On the other hand, this mode allows you to make interesting things if you own other stompboxes. 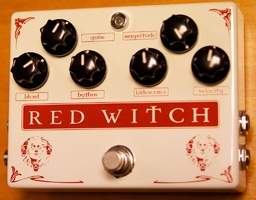 On the left hand side, you'll find a Blend control to adjust the balance between chorus and dry sound. The Guise three-way rotary selector allows you to choose between the Tremolo, Chorus and Tremolo/Chorus modes. The Bathos knob adjusts the depth of the chorus effect. On the right hand side, you get an Iridescence control to get a subtle and clean chorus effect or a muddy lo-fi sound. Everything in between is also possible... The Magnitude control adjusts the depth of the tremolo effect while the Velocity knob determines the speed of both effects (tremolo and chorus for readers who don't follow me). Finally, note that the stompbox can be powered with a 9V battery or an external PSU, and that you can access a clean booster on the inside of the stompbox. Nice!

The chorus effect seduced us with a rather wide sound range, courtesy of the Iridescence control. The fact that this effect can be coupled and synced to the tremolo is really interesting. We created the sound samples in a way that you can check the impact of the different settings on the sound: you'll notice that the Iridescence setting can add some hum with extreme settings and that the Magnitude control makes the overall volume decrease quite a lot. As a consequence, we miss a volume control like the one on the Pentavocal tremolo...

With prices ranging from about $250 (Fuzz God II and Pentavocal Trem) to about $400 (Medusa and Titan), these stompboxes are definitely high-grade products providing a perfect construction and a high-quality sound. They are made for analog sound fans who want more than what they usually get. The Titan allows you to get very interesting results in spite of its limitations. The Medusa is an original and very good sounding product, even if it's not perfect. The Fuzz God II is our favorite model because it is not so expensive but still provides interesting possibilities. The Pentavocal Trem is also a very interesting tremolo effect pedal, whose different voicings and Bottom control make it very original.