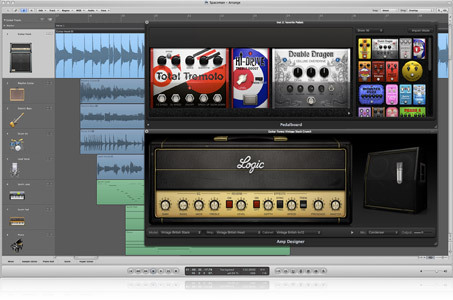 General Sequencer from Apple belonging to the Logic series.

View other reviews for this product:
Anonymous
Publié le 10/31/11 à 09:20
Logic is that program that people all recognize. It can almost be considered second fiddle to Pro Tools in ubiquity. Do not take that with the negative connotation that that phrase normally comes with. Logic is essentially the program that Macs users may have, considering that it is built by Apple. And it has earned a reputation as being an incredibly easy to use song writing tool with everything it comes with. The set up for logic is just simple. A couple of clicks and you are in. Although I find the environment a little bit intimidating, it is there for you to play with, and what it can do is so much more intuitive than any other program's routing capabilities.

What is incredibly special about Apple's Logic Pro 9 is what the package in and of itself is. If you need a comprehensive digital audio workstation to get started, Logic is such a quintessentially Apply product in that everything is just there for you. While the included sampler may not be anything like the more ubiquitous retail things like Native Instruments Kontakt, Logic's sample comes with the program and is far more comprehensive than any other program. Add a bunch of royalty free loop packages and all of a sudden, you have so much to work with! The other incredible thing about Logic is its flex time technology; lining up audio happens in many digital audio workstations, but the ease with which it it implemented and the quality is unsurpassed.

There may be a little bit of bloat to this program, but Apple hides it; Logic is just a beautiful program upon opening, and you have no idea how comprehensive it can actually turn out to be. It is regrettable that I myself do not currently own a Mac, for if I did, Logic would be sitting on it, open all day.
00