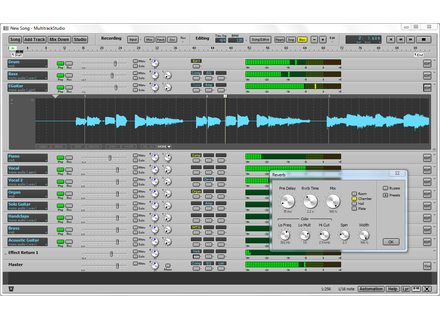 Bremmers Audio Design updated its MultitrackStudio DAW for Mac and Windows to version 7.5.

This new version of MultitrackStudio is completed with a new Multitrack Remote app that allows users to control the DAW parameters wirelessly from their iPad.

The app includes controls for transport, including Varispeed and markers, tempo track, MIDI keyboard splitter, and offers the ability to add and control tracks, groups, up to 3 effect returns, master section as well as virtual instruments and effects.

The V7.5 update doubles the number of effect slots for the mixer section (6 instead of 3 previously), adds a "Half Solo" feature that does not entirely mutes the other tracks but only lowers them by 12dB when you Solo a track. You can activate this feature with a double clic on the Solo button.

Also new is the possibility to record VST and AU effect plug-ins MIDI output on a MIDI track, this output will be merged with data from input MIDI devices.

Note that this version of MultitrackStdio is compatible with the latest Mac OS X 10.9 Mavericks and Windows 8.1.

MultitrackStudio 7.5 is available in three versions (Pro for $69, Pro Plus for $119 and Lite free). The Multitrack Remote app for iPad is available for free download from the AppStore.