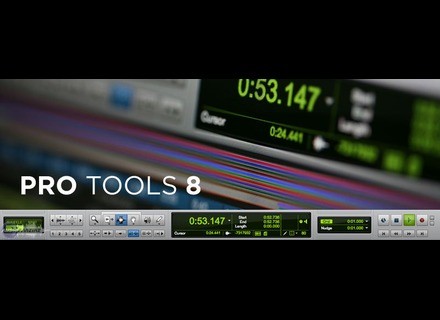 View other reviews for this product:
Digidesign Pro Tools 8 was a quick install after downloading the upgrade up from Pro Tools 7.4 from Digidesign's website.  It only took a short while and had it up and running rather quickly.  I haven't had any compatibility issues at all and can't think of any problems whatsoever that I've had with Pro Tools 8 in the short time that I've had it.  The interface of the software is quite different than the previous versions of Pro Tools, but users of previous versions will be able to adapt quickly because even though there are a lot of new features, the old functions and features are still there and are the same.  The interface looks more like Logic than it ever has before, probably because of all of the new MIDI features and Digidesign's desire to cater to that audience a little bit more.  The manual is pretty complex and while I haven't used it much, it definitely seems like there is a lot there and that there is a lot explanations available.

So far I haven't had any problems at all running Digidesign Pro Tools 8 as it has run smoothly and stably.  It seems to run a little bit better than Pro Tools 7.4, even if the difference is subtle.  I am currently running the software on a Pro Tools LE system using a Digi 002R audio interface and a Mac Book Pro that has a 2.2 Ghz Intel Core 2 Duo processor and 4 GB of RAM.  I have also used Digidesign Pro Tools 8 on a Pro Tools HD system, on which it runs much better than in LE, which is to be expected always no matter what version of Pro Tools you are running.  I've only been running Pro Tools 8 for about a month as this is quite new software.

While it took a little bit of getting used to, I must say that I now really enjoy using Digidesign Pro Tools 8.  It was a little bit weird at first simply because the interface is so different than the previous version and I was skeptical of making the switch at first, but I'm glad that I did because Pro Tools 8 has the same great user friendly features that they are famous for, with a whole bunch of new added features including extended MIDI capabilities and music notation features.  The plug-ins that it comes with are also upgraded and they now include SansAmp which is a really cool plug-in that previously did not come with Pro Tools.  The price of the upgrade from earlier versions of Pro Tools is pretty reasonable and since that is what I did I'm not sure about the price of it new.  I would highly recommend checking out Digidesign Pro Tools 8 for all Pro Tools users as they have taken it to the next level!