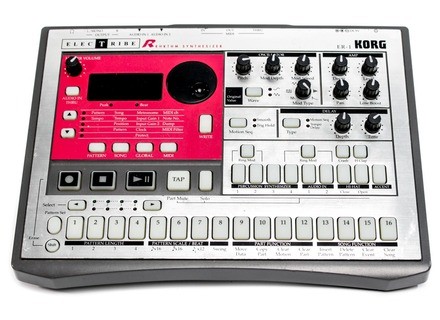 ElecTribe Er-1, Groove Machine from Korg in the ElecTribe series.

No extensions of my knowledge, an editor for Mac / PC can be, I do not know ...

The machine is as simple as using a television's

paramtres available for the few sounds synthse are not a formidable technics even for a total nophyte (tune, release, waveform ...) effects (delay, flanger , ring modulation) trs are (too) simple to use.
Treatment (limited effects) of external signals fun.

You can throw the manual, and then the one-page résumé is so simple.

Now, the extreme simplicity of Mahine inevitably leads to an extreme limitation of the possibilities.
Where to start?

The delay for example! Intrets how to have a delay that applies immediately all sounds? It was quick not to use it because it always returns a serve in the same Manir: either continuously and there is not thirty six possible rglages or fawn dub and each shot is knob any rhythm that starts in Jamaica.

Custom settings for synthse: WHY THERE IS NOT SETTING THE ATTACK?! HEIN?
What Intrets to have low and feet which can not rgler the attack?! no, all of sudden percussive clicks early in the race and it's quickly drunk. Unable to round coffee or soft, has always starts with a hammer.

The cymbal and clap sample plant that are always same, makes a relatively psychopath after a while ...

Apart from these few points, not too virulent criticism ...

We should not take away his qualities though: the sound is excellent bill in its style, and sometimes even impressive dynamism and prsence.

By using the résumé for a year, I think she has the inconvnients its benefits.
it is a very easy machine to ACCS, flexible working, which has all of the same a damn good sound.
the inconvnient is that the possibilities are frankly limits, and the sound is ultimately trs "typquot, and township records restricted stamps. But hey, it n has not the prtention rvolutionner of music, and is an affordable price trs used (between 150 and 300 euros general)

An excellent machine to get your feet so much more INTERESTED once with another couple electribe (S for example) and a small multi-effect.
See the source
Did you find this review helpful?yesno
Cookies help us improve performance, enhance user experience and deliver our services. By using our services, you agree to our use of cookies. Find out more.