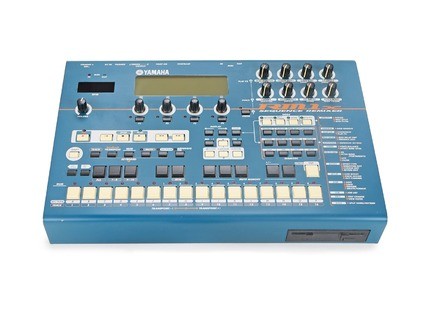 Value For Money : Excellent
View other reviews for this product:
Trs-connector audio summary (1out stereo + phones), no MIDI Through is not a luxury.
-Many sounds DIFFERENT, editable in real time (one of the great quality of the machine)
-3 Dpart effects catgories rank 3, a block rather dedi delay / distortion / EQ, another focuses on the chorus / flanger and a block for spcial reverbs
Squenceur 16-track, recording proves to be tedious, however many people it employs a squenceur software easily edit parts, each pattern is divided into "section" which can write diffrent 16 parts per track.

I can not speak of the manual I did Jamia possd but even without it I'm out trs well, however it is better to know a little of the universe or we just groovebox finds herself lost in the various sub-menus.
all basic functions are accessible directly faade thanks to eight pots (not very practical because it always leaves their position rel, regardless of the relative value which causes no jump trs natural ...)
However, the edition of possibilitr are rather crude, LFOs matrche poorly and are not natural trs again!
recording parts of the puzzle revlent head even though it is supposed to be simplified by the "step sequencer", the keyboard is really degeu, trs not pleasant ...

Big weakness of the machine, rhythmic sounds too mtallique, too round, there's a passen qelque sounds provided on them by double-modulated (sounds when the 808 is worse than j 'ever heard, when the drum for help it looks like they have t recorded in a crate mtal)

synth sounds of the limit of unusable pads ridiculous bass lines degeulasses slobbery, impossible to get out something else that sounds hard it is reminiscent of a machine purely numrique. no edition features waveforms then forced to work deep sounds, it obviously costs less than a Nord Lead, but good nonetheless yamaha has accustomed us better (see pattern)

the reverb is cold and the stink numrique full nose, the effects the most convincing is the delay that allows twelve o'clock CRER many funny parts, ladisto I will not even speak when the flanger and company it is still that is not as bad ...

edition of the Veloci is fairly intuitive but since the keyboard does not recognize it can be a bit skeptical that level l. ..

I have used for 3 years, the base I t seduced by the price and the CHARACTERISTICS much larger than the groovebox, more's the only machine of its range of price that allows the preservation of these patterns on disk and import midi file standart tyoujours via the same medium

but good for the price you can honestly difficilemen complain, it offers lots of handy features for tech

East debutant but rather used as a sequencer / controller noon (the last a little CHRE the controller anyway ...)

About me if I buy but certainly not against it allowed me familiaris with the sequencer functions (although the best machine for beginners even when the computer is in my opinion!)
See the source
Did you find this review helpful?yesno