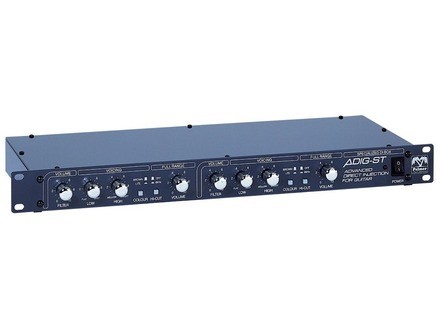 Value For Money : Excellent
View other reviews for this product:
The characteristics of the animal have been described in prior reviews. So I'll allow the economy to re-detail.
However I note that the purpose of this unit is to operate in line level (even if other modes are possible, actually)

In short, I left a notice on AF:

I searched for a good fifteen years or a laptop with good sound. And I've tried simulations: software, hardware transistor. I was looking for a good distortion sound of metal / punk.
Specifically (and this is where it gets complicated) in a record worthy of the name, I see two "grains" in the distortion: a close-grained, generally well emulated, a larger grain, due to the speaker (usually You will understand, poorly emulated or not at all). I admit that when I explain this to most of my friends guitarists, they look at me as if I spoke Chinese (well, Mandarin). But for me the Mass was said: I had this double grain to be satisfied.
On the test trials, I came to study the solution Palmer in general, and since I wanted the laptop, the PFA05 in particular (I typed all the forums and sites I could find). In an incredible twist of fate (there is no other way for this to happen) I used a chopper (thank you Henry!) For € 350 (the normal price in time, hardly possible to find a less expensive, and the chopper nine, given the price, it's still a matter of pros). Honorable for a price already, after all, what remains a simple simulation of HP.

So, having shown a patience very typical of the musicians I tested the unit in a very simple config:
Guitar> distortion pedal> sound card.
Guitar: Ibanez S520X (S series correct mag sold 700 €)
Pedal: Guyatone Metal Monster Tube
Map: Edirol UA25
And I must admit that, although the report was better than anything I had tested before, my happiness was not perfect. I could not find my double grain ... : (
So I say that it did not matter, certainly as the solution to my problem was to look in the configs like:
Guitar> Preamp> Poweranp> loadbox with PGA (whose purpose is to turn in power level)> sound card.
A slightly less portable, of course, but if the sound was there ...
So I planned without too much bitterness to sell my PGA05 the price I had bought. In any case, given the scarcity and reputation of the unit, I would not stay long on the arms ...

And in the meantime I offered a ESP Viper Urban Camo: I was looking for a guitar for a very visual group project, while aligning a high-end violin.
Well, old chap! When I plugged the guitar in the Bouzin, I immediately saw the difference! And my fucking double grain I had sought so many years ... ben and he was there! just below my ears!

AAHAHAHAH !!!!! Buoyed by the euphoria of the moment, I began to laugh, thinking back to the relamping of my power amp (300 €, it's always nice ...), I started crying, thinking back to all my galleys for adjusting its depending on the acoustics of the place (you know, the refined setting of the hair c.. in the rehearsal room, and do nothing in the concert hall).

In short, there are two morals to this story:

Moral number one: the good stuff is expensive (I'm preaching to the converted, without doubt, but for the youngest of us it must be said: the "simulators" cheap digital sound will never give a correct record, despite the claims of their manufacturers). My little portable configuration back to me (price side argus) 1450 €.

Moral number two: when there is a weak point in a string of his ... the whole chain suffers. Change for a better guitar lutherie: that was the problem.

Finally, and after I leave, I had the opportunity to compare with taking a microphone and speaker +, although I know (df forum here) opinions vary, and although in my case I think very clever one who can make a difference to the ear.

Very positive overall opinion you will understand.
I hope my advice will help some who find themselves in a similar situation.
Good day!
See the source
Did you find this review helpful?yesno
Cookies help us improve performance, enhance user experience and deliver our services. By using our services, you agree to our use of cookies. Find out more.