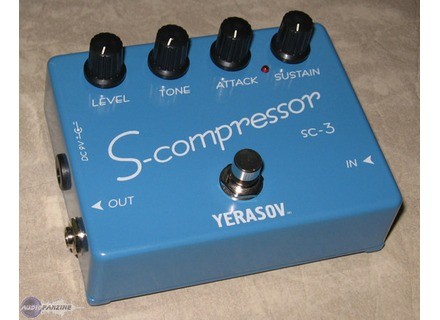 Compressor for electric guitar purely analog (based on an OTA for connoisseurs) and presented in a sturdy metal case. More like a good achievement "home" as an industrial product, but it's not a criticism, quite the contrary! Smaller than it appears in picture ...
Connectivity standard for pedal effects: input, output, and a jack for 9V DC external power supply. To access the internal battery please leave the screwdriver!
The "bypass" is a true bypass "hard", which directly connects input and output.

Manual in Russian, so not very useful, at least for me. Funny detail: the final page, "fit for duty" it seems, is dated and signed by hand by one who has tried it! Ah, there was more used to it with the "Made in Taiwan" ...
4 buttons, whose name is not explicit enough to spend hours. Only the button "attack" is surprising, in fact it adds a little "fishing" ... gain during the attack on the rope, like a synthesizer ADSR envelope.
Knob the volume (level) significantly amplifies the signal in the second part of his race. So it can be used also as a boost, setting a "sustain" minimum tone and "attack" at will. Interesting example to bring out a solo or saturate an input amplifier. Probably not originally intended ... and certainly not sold as such.

Well ... it compresses, it is no surprise. And he does that well, the effect is not cartoonish, digital is not where the "arms race" is often "too good" results. The guitar sound is changed (slightly) than in the Knob tone and a helping of "attack" that makes compression more "natural" stressing a little stroke of pick, often dressed with this kind of effects. No breath or other unwanted noise, and the "bypass" is of course completely transparent. The cross is quite noisy him, but that's quibbling.
To summarize: discreet but effective. Do not expect to get stuck 5 'on a note as Santana or Gary Moore, but the sound that comes in comes out intact and just "extended".

The price of the craft industry, a forty € the end value - really excellent prices.
Reliability: we will use, as I've had 48 ... but it inspires confidence. Ditto for battery consumption.
"Mr Yerasov" makes its schemas. "Pdf" on its website (Russian, not English) is a rare and sympathetic, because if it is to return its equipment to repair ... In fact about delays when you order should not be pressed, but the game is well worth the effort.

24/08/2010: The reliability is to go. Consumes very little battery when you start to have the breath it's time to change.
See the source
Did you find this review helpful?yesno
Cookies help us improve performance, enhance user experience and deliver our services. By using our services, you agree to our use of cookies. Find out more.