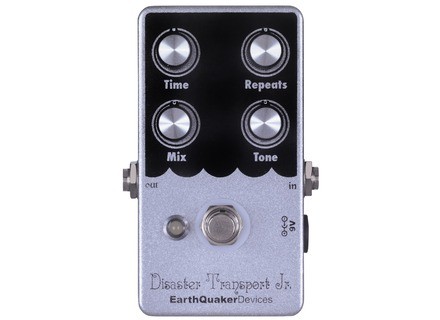 View other reviews for this product:
The Earthquaker Devices Disaster Transport Jr. is a compact delay pedal that is designed for use with electric guitar, but suitable for use with any electronic instrument. However, I’ve only used the pedal with electric guitar, so I’ll be focusing on use of the pedal here. It’s got a pretty standard configuration in terms of it’s general characteristics, with ¼” connections for input and output and a nine volt power supply jack. The pedal isn’t going to be rackable in any fashion as it’s a foot controlled pedal.

You don’t need to know much or have much experience with other delay pedals in order to use the Earthquaker Devices Disaster Transport Jr. The controls that they give you to work with here include those for time, repeats, mix, and tone, which are all pretty self explanatory parameters, even if you’re new to using delay pedals. A manual isn’t something that I’d think would be necessary here…

The tone of the Earthquaker Devices Disaster Transport Jr. is incredibly open and wide. It’s a really clean sounding delay pedal as you won’t get any extra sounds or noises other than the repeats. The sound of the pedal reminds me a lot of the type of delay The Edge would use from U2, although I know his delays are much more in depth than this – it’s just that kind of vibe. I’ve used the pedal for a recording session with a Fender Telecaster and a Fender Pro Reverb amplifier.

The Earthquaker Devices Disaster Transport Jr. is the perfect little delay pedal if you’re going for this kind of sound. Of course there are endless varieties of delays out there, and while I wouldn’t say that this is the most versatile delay pedal on the market, for what it can do, it’s really great for it. If you don’t use delay all that often, the pedal will undoubtedly do the trick for you, but if you’re looking for something with a bit more control, you’re probably going to need to look elsewhere or use this in tandem with a different type of delay pedal. Having said this, if you had to have one type of delay in a compact unit like this, the Earthquaker Devices Disaster Transport Jr. would be a terrific choice!
Did you find this review helpful?yesno