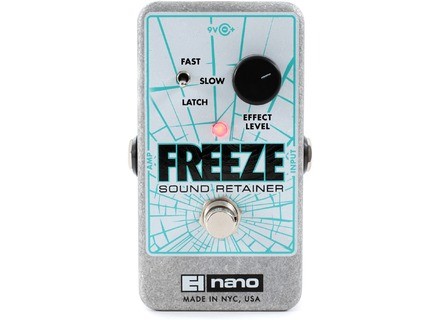 Buy this productView price information >
View other reviews for this product:
This is a stompbox from electro harmonix which can be used to infinitely sustain a note or chord of your guitar playing. Even better than just being able to sustain a note or chord is that you can play over the top of it to create some interesting sonic textures. This unit isn't rackable or able to be edited using a computer. Some of it's features are:

-Powered by a 9V input jack or 9V battery

-Three simple controls: Volume of the frozen signal, 3-way mode toggle switch (Fast, Slow and Latch) and finally the footswitch which sustains the sound when depressed.

Very simple to operate, only three controls: Volume knob, Mode toggle switch and the Footswitch. The volume knob simply controls the volume of the frozen signal so you just set it to get the frozen signal/dry signal ratio that you want. The mode switch has three options Fast, Slow and Latch. In the Fast and Slow modes the frozen signal is only heard when the footswitch is depressed. The difference between the two modes is the fade in and fade out times, the Fast mode fades in quickly and decays quickly and in Slow mode the fade in and out is a bit slower. The fade in and out times in Slow mode can be adjusted fairly simply. Finally the Latch mode sustains after the switch is pressed once until you press it again so it allows you to move around while sustaining a sound.

It's an interesting sound which can sound a bit glitchy some times but this pedal definitely has it's own character. Using the Slow mode some interesting bowed style sounds can be created. I really like this pedal and will be keeping it on my board for a while.

I really love this pedal, it has lots of different uses and it's nice an small. The only thing I dislike about this pedal is that I've found that it can sound a bit poor if there are fuzz pedals in front of it which makes it difficult to have a fuzzy frozen signal and play over the top of it with a clean tone. I have found some mods for the freeze to add a effects loop so that the effects in the loop only effect the frozen signal so hopefully I can work out to do this myself as that will make this pedal amazing.

If this pedal come with an effects loop built in then I would give it a 10 so hopefully in the future EHX will add this feature in.
Did you find this review helpful?yesno